Having already made the rounds at PAX and IndieCade, DigiPen team Cactus Curse’s Penny Blue Finds a Clue is officially heading to this year’s Independent Games Festival. Along with Guardian of the Gears, Penny Blue is one of two DigiPen games nominated for the festival’s “Best Student Game” category.

Penny Blue is an unusual game both inside and outside the context of DigiPen. Amid many platformers, puzzlers, first-person shooters, and action games, it is one of the rare classically-styled adventure games to come out of DigiPen’s halls. But even within today’s increasingly rarefied world of adventure games, a world that’s fallen from the limelight of its ’80s and ’90s heyday, Penny Blue is an outlier — stripping the genre of its well-worn conventions and mechanics in an effort to push the form forward.

Growing up, Penny Blue creative director, story lead, and character artist Lauren Stutzriem loved playing Her Interactive’s Nancy Drew adventure games. She also loved getting other people to play them for her.

“I remember not being very smart or patient with those games as a kid and kind of coercing other people into doing the harder puzzles and challenges for me,” the BFA in Digital Art and Animation graduate laughs. “Then I’d shoo them off so I could play the more exciting, sleuthy parts myself.”

When it came time for Cactus Curse to design a game for their senior-year project, Stutzriem’s fond memories of the genre struck a chord with teammate and soon-to-be Penny Blue design lead Jesse Hibbs (BS in Computer Science and Game Design), a fan of classic LucasArts adventures like Grim Fandango and Full Throttle. Hibbs and Stutzriem decided to tackle the genre themselves, albeit with a catch.

“Old adventure games… playing them can feel really bad,” Hibbs says. “For example, watching your character slowly walk across the screen where you click — it doesn’t feel like you’re taking action. It feels like you’re watching the character take the actions.”

“And then there are the gluttonous, bloated inventory systems,” Cactus Curse level designer Garrett Huxtable (BA in Game Design) says.

Penny Blue would be different, they decided. To address that first genre pitfall, Penny Blue would eschew adventure games’ traditional 2D style and third-person perspective in favor of a unique 2D/3D hybrid art style and a first-person perspective — effectively removing the cumbersome point-and-click movement of yore and returning that missing sense of “action” to the player. To address the “bloated inventory systems,” Cactus Curse conceived of a “two-hand” inventory, only allowing the player to hold two items at a time — one in each hand — that the player can’t drop until the item’s use in a puzzle is resolved.

As a parody of Nancy Drew, Stutzriem’s Penny Blue character is a self-important, renowned tween detective. But as an homage to her own childhood, “I thought it would be funny if you didn’t actually play as Penny Blue, but as the kind of character I would have suckered into solving the Nancy Drew mysteries for me,” Stutzriem says. In Penny Blue Finds a Clue, Penny Blue never actually finds a clue. Instead, you, her babysitter, reluctantly end up doing all the work for her as her “rookie” detective.

Although Cactus Curse thought they’d identified all the pitfalls of the adventure game genre, they fell into a large one as soon as they started the development process.

“Writing and designing an adventure game with an interwoven narrative is a huge hassle,” game designer, engineer, and writer Leonardo Saikali (BS in Computer Science and Game Design) says. “We went at it the wrong way several times.”

The team’s running “clue map,” the catch-all term they used to refer to their schematic for “everything in the game,” grew incredibly unwieldy the more they worked on it.

“We were like, ‘OK, we need to list out all the clues anyone is ever going to find, all the important dialogue points that trigger other important points in the game, and everything needs to be interwoven in a way that makes sense with all these concurrent narrative threads,” Saikali says. Once the team realized they’d need to chart out conditional situations as well (“Like what if you talk to this guy and you don’t have this clue yet?” Saikali says), their “clue map” became too big to handle.

The breakthrough came during a big team meeting.

“We pretty much started working backwards,” Saikali says. “We realized we had been trying to build a castle without blueprints, so to speak.” Once the team agreed on all the “goals, metaconcepts, and story points,” a more sensible, reverse-engineered clue map finally took form.

The next major roadblock would turn out to be a milkshake.

“The early playtests took people about an hour and a half, and the majority of that was the milkshake puzzle,” Huxtable, who led the playtesting, says of what turned out to be the game’s biggest head-scratcher. Players, confused and frustrated as to what to do with a mysterious milkshake item, started wandering around looking for other puzzles to solve — but to no avail. “They actually couldn’t do any other puzzles until they solved the milkshake puzzle,” Huxtable says. 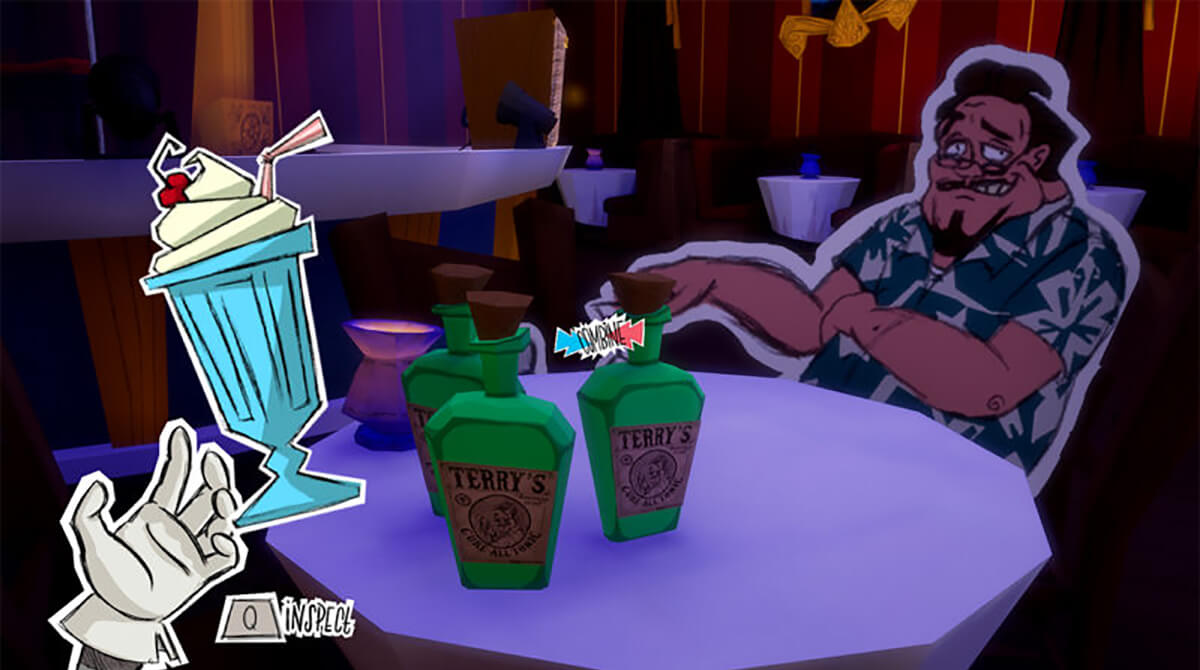 While adventure games have a well-earned reputation for exceedingly esoteric puzzle solutions, “Our goal was not to make an adventure game like that,” Hibbs says. “We never wanted the player to feel like they had no idea what to do next.”

“By the end of senior year, we got it down to about 30 minutes on the milkshake puzzle alone,” Huxtable says. “And then by IndieCade, we got the entire average playthrough down to 30 to 40 minutes total.”

The team’s efforts seem to have paid off. Although Cactus Curse’s members have since graduated DigiPen and many have started their own careers in the industry, Penny Blue continues to garner attention. Beyond the recognition from IGF, the team was also surprised to find a number of playthrough videos posted from Germany, Italy, England, Canada, and the U.S. not long after the game was made available for download on DigiPen’s website.

“The first thing that surprised me about the playthroughs,” Saikali says, “was that people actually solved the milkshake puzzle.”