Come this weekend, a group of Redmond-area high school students from the Washington Network of Innovative Careers (WaNIC) will represent DigiPen at the Pacific Northwest district championship of the FIRST Robotics Competition (FRC).

This is the second year that a team from the DigiPen-based program has participated in the nationwide competition and the first year in which they have qualified to participate at the district championship level.

Combining sport and engineering, FRC challenges teams of high school students to build an original remote-control robot to participate in a series of competitive matches. Each year’s competition introduces a new sporting event with new rules and methods for scoring points. Participating teams have only six weeks to design and assemble their robot, which must adhere to a strict set of guidelines and restrictions — including a weight limit of 120 pounds and a budget not to exceed $4,000. Matches play out on an arena-like playing field with spectators and announcers, as well as live online streaming for remote viewing.

For the 2014 competition, titled “Aerial Assist,” teams participate in a series of three-on-three matches, with cooperative red and blue team alliances vying to earn the most collective points during a set time period. Robots can score points by successfully executing various functions, most notably by shooting a 2-foot-diameter exercise ball through one of three of goals situated at the opposite end of the playing field. Teams and alliances also score bonus points by passing the ball to a teammate, throwing the ball over a midfield truss, and — if possible — by having another team robot catch an over-the-truss pass.

“The game is built on how you can pass the ball and work together with teams,” Tucker Sneed, a sophomore from Eastlake High School, says. “A lot of the ways you can score are based upon how well you work with people, which is very interesting.”

As members of the DigiPen Robotics and Future Technology (DRAFT) 540-hour course, Sneed and his nine fellow classmates represent the engineering core of the DigiPen FRC team (which goes by the name “FIRST DRAFT”) that designed and built the robot. Other students from the WaNIC programming and animation courses have also participated on the team.

The game is built on how you can pass the ball and work together with teams.”

From the moment the rules were announced during a January kickoff event, Sneed says, the team members had agreed to a particular strategy.

“We realized we were a smaller team, full of rookies, with no experience in FRC and very little in building bigger robots,” Sneed says. “We knew at that moment that we weren’t going to be going for a shooting role, because if you are inaccurate it’s practically useless for your team.”

Instead, the team initially devised their robot to be heavy in torque — useful for pushing and quickly defending against robot opponents — and able to assist other ball-shooting robots on their alliance. 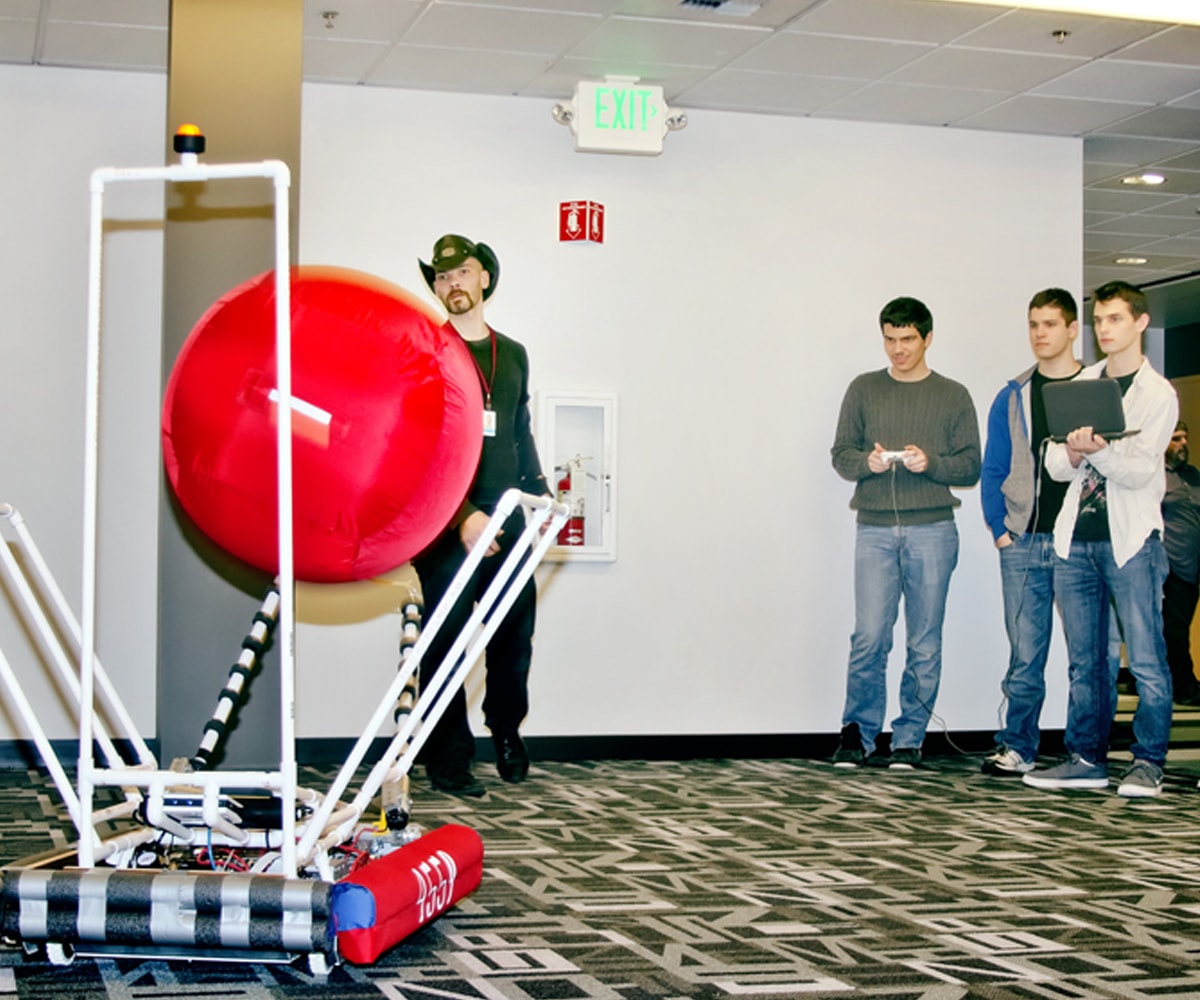 Due to a few untimely errors in shipping and communication, the team members didn’t receive their actual build kit until three weeks into the six-week build period — forcing a radical change in design and scope. Team members rapidly prototyped new designs, relying on cheaper and easy-to-manipulate building materials, such as PVC pipe.

As it turned out, the new materials offered several benefits, namely by creating a flexible framework with which to catch the ball, which is thrown onto the playing field by a human participant.

“Most people’s robots aren’t really built for that. So what ends up happening is the ball will bounce out, or they’ll hit it wrong,” Sneed says. “So what we do is we end up getting the ball from a human player, running it to a shooter, and then sometimes we’ll even catch the ball over the truss.”

So far, the team’s focus on catching and assisting has made them a valuable team ally. At the second of two district qualifying events in which they participated, the FIRST DRAFT team advanced to the final elimination round and won the event alongside the two other teams in their alliance.

What we do is we end up getting the ball from a human player, running it to a shooter, and then sometimes we’ll even catch the ball over the truss.”

“There’s a lot of scouting at FRC, where you walk around and you take notes on other people’s robots,” Sneed says. “That’s actually how we won our last event. We had a really good alliance that really liked us, that cooperated well. And we all knew the weaknesses of the people we were going up against.”

Of the 153 teams in their district, the DigiPen-based squad is currently ranked at No. 27. For a team of first-time participants — who also happened to overcome a three-week setback in building their robot — the achievement is notable.

They now go on to compete with all of the other top 64 qualifying teams on April 10-12 at the Veterans Memorial Coliseum in Portland. The top performing district teams will then advance to the national competition. 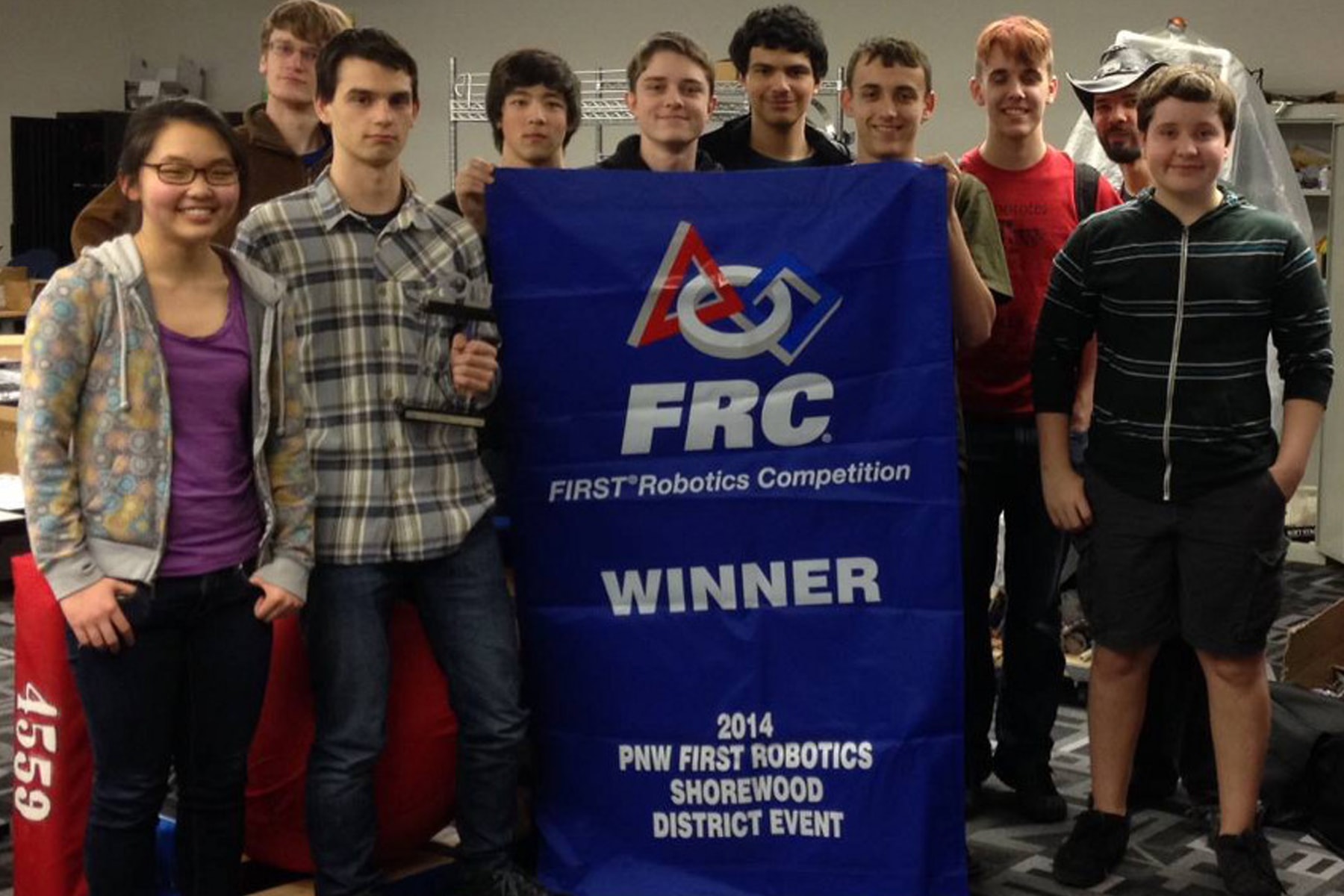 According to Brian Tugade, class instructor for the DRAFT program, his only contribution to the building of the robot was the suggestion to use Lego wheels for a particular attachment. Other than that, he says, it’s been an entirely student-driven affair — and a valuable learning experience.

“They’re taking all this stuff that they have learned about in class — what with programming and electronics — and they’re applying it. They’re confronted with harsh reality,” Tugade says. “It’s not enough for it to be a good circuit. It’s got to be a good circuit now that can stand up to getting smacked by another 120-pound robot.”

Much like DigiPen’s college curriculum, the DigiPen WaNIC Academy Program is designed to prepare students for careers and pathways into digital technology and entertainment. Some program courses offer Advanced Placement and DigiPen college credit.