While other games have toyed with the dual concepts of 2D and 3D gameplay, few have blended the two so seamlessly as Perspective, a DigiPen student project released this past December.

Perspective is an experimental puzzle game in which players take control of two separate “characters”: an on-screen sprite that moves and jumps about in two dimensions, and a first-person camera that moves about through 3D space. By changing your perspective in the 3D world, the glowing blue and orange architecture realigns to create entirely new 2D structures that determine where the sprite character can go.

Play for about five minutes and you’re likely to marvel at what feels like an entirely new type of puzzle game. Play through to the end and you may leave your computer screen seeing 2D level design everywhere you look — with or without a little guy running around.

DigiPen RTIS students Pohung Chen and Jason Meisel were fresh from the success of their IGF-winning sophomore game Nous when they began brainstorming for their junior class project in Spring 2011. The original idea, they said, went through a game of telephone — with everyone on the team interpreting the concept slightly differently.

“It took a couple of weeks for us to actually define the basic idea,” Chen, the game’s producer, said. “And one of the big things we wanted to find out early on was, ‘Can we actually make this a game and have interesting puzzles, or is this just sort of a cool idea?’”

For an initial prototype, Meisel built an outline of the game using the Google SketchUp 3D modeling program.

“It was pretty primitive early on, but I think from there we sort of had a better sense of what kind of levels you can make and actually see that there could be complexity,” Chen said.

Are we doing a game about a crazy modern artist? Like what kind of theme can you make where a 2D guy moves in 3D space?”

With their concept proven, the team began programming the core technology that would make the game possible. Building the 3D graphics engine was one step. The more difficult part was figuring out how to overlay a 2D map using the features and geometry of the 3D environment — and then have a 2D character interact with it.

For a traditional platformer, Chen said, a developer will know ahead of time what kinds of terrains their character will have to interact with. In Perspective, the 2D surfaces are constantly rearranging at all manner of angles.

“You can get all sorts of weird corners and configurations,” Chen said. “You essentially have to account for every possible case.”

Another longtime discussion revolved around the theme of the game, and whether or not to frame the perspective-shifting mechanics in terms of a narrative.

“Are we doing a game about a crazy modern artist? Like what kind of theme can you make where a 2D guy moves in 3D space?” Chen said. “Are you in space? Are you like a cyber-hacker projecting things onto the wall?”

Without settling on a final solution, the developers tentatively went forward with a space station theme, deciding they could change it later on if and when they came up with a better idea, which they did.

“Somehow we came up with the idea for having it so that you see the character come out of a video game,” Meisel said. “And from there, we were like, ‘Okay, where do you play video games? An arcade.’ And so that’s where that whole aesthetic came from.”

From the beginning, the developers knew they had a concept that could generate a decent amount of interest among PC game players. What they didn’t anticipate was getting more than half-a-million views when their initial game trailer was uploaded to YouTube last May.

We never were really able to make a nice reveal trailer, because at that point everybody knew about it.”

Interestingly enough, that video had only been created as part of a competition submission. It was never intended as a public announcement trailer.

“So it was showing the entire game, and none of it was paced well,” Meisel said. “We never were really able to make a nice reveal trailer, because at that point everybody knew about it.” 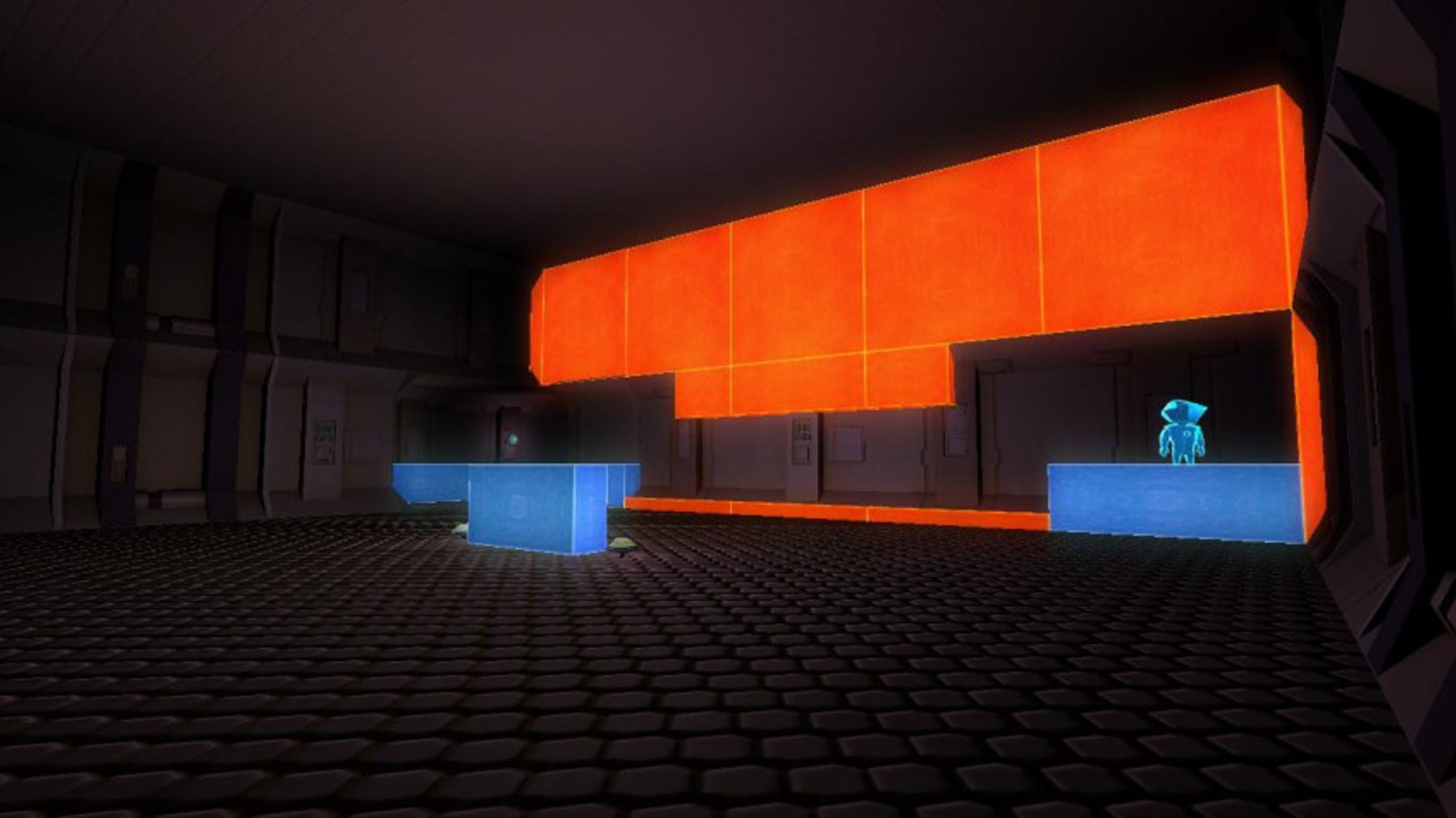 But while players were already buzzing about Perspective, the developers still had difficulties organizing the game in a way that was both intuitive and enjoyable for people to pick up and play. Whereas the game made sense to fellow DigiPen students, playtesters outside of the school had a hard time getting past the first obstacle.

“It was very non-approachable at the time,” Chen said, “because we didn’t really know how we could break it up into good pieces and teach players each piece in a way that makes sense.”

To improve the user experience, team members recruited Logan Fieth from the Bachelor of Arts in Game Design program to design new levels. Taking bits and pieces of existing content, Fieth slowly broke the playing experience up into bite-sized puzzles that better acclimated players to the game’s mechanics.

Since its release, Perspective has received many glowing write-ups and reviews from bloggers and game journalism sites. Renowned indie developer Terry Cavanagh shared some flattering words about the game on Twitter. And YouTube videos began springing up as intrepid players from around the world recorded their first-hand experience with the game from beginning all the way to the surprising end.

“Just as a student game, it’s pretty rewarding to have an hour or so of content that people actually get through and enjoy,” Meisel said.

While the game is finished and shipped, Meisel said he hopes to release a level editor and include some of the more challenging levels that didn’t make the final cut. Both developers welcome the thought of a community that will push Perspective’s puzzles and mechanics into even more mind-bending directions.