At first, DigiPen MFA in Digital Arts graduate Hannah Patten was nervous no one would want to participate in her thesis project. Inspired by the scores of women who had come forward to tell their stories of sexual harassment and assault as part of the #MeToo movement, Patten decided to write and illustrate a comic book, turning the stories of the real women she would interview into superhero origin stories.

“I thought, I don’t know, this is a vulnerable thing to open up to a stranger about — to tell me about them, who they are, and the stuff they experienced,” Patten says. “I doubted a lot of people would want to be that vulnerable with me.” GRL PWR, the comic book that resulted, features three superhero stories based on Patten’s interviews — just a fraction of the 20 she ended up conducting with enthusiastic volunteers. “There came a point where I actually had to turn people away,” Patten says. “Once I started posting about it and showing some of my drawings and concepts, everybody wanted to be a part of it.”

For Patten, GRL PWR was both an academic and activist exercise. On the one hand, the project afforded Patten, an aspiring character artist, a chance to showcase her design skills — turning women into alternate universe versions of themselves, and imbuing them with unique superpowers. But on the other hand, it also offered those women a chance to see themselves and their pasts in a new light. “I wanted to do something that matters for my thesis, something that brings real-life women in with these characters and makes them stronger for the things they’ve overcome,” Patten says. “It sucks to be defined by your trauma. You want to be defined by the positive traits you have as a person.”

Those positive traits are exactly where Patten started during her interviews. In cafes and bars across Seattle, before diving into their difficult stories, Patten spoke with her project volunteers one-on-one about what they felt defined them as people — their morals, virtues, hobbies, and the things they valued. Those qualities, rather than the nature of the assault or harassment they had endured, became the basis for their character designs and superpowers in GRL PWR. 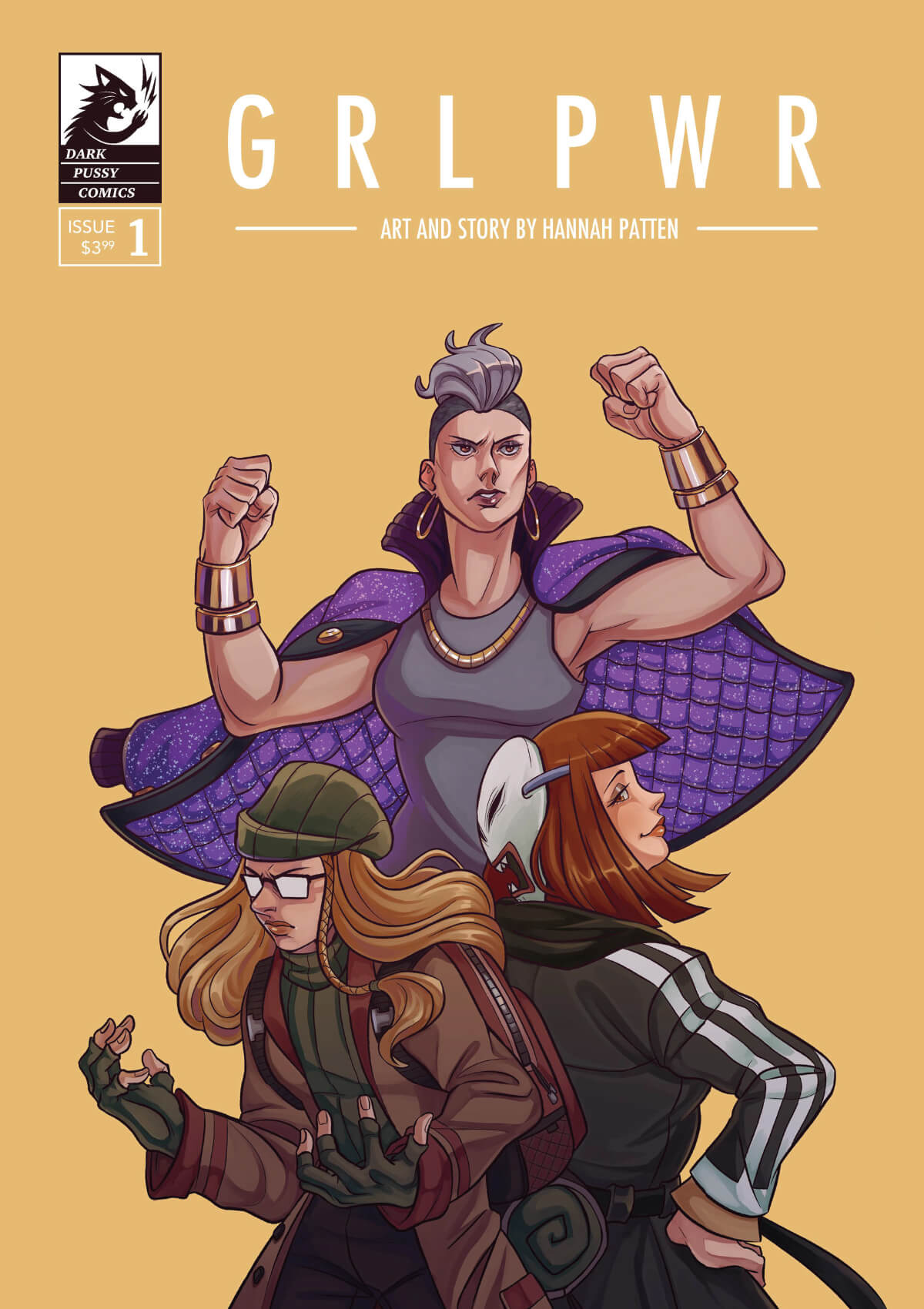 “For example, the first woman in GRL PWR, Cadence, was really into horror, loves animals, and grew up on a farm. So I thought, you know what? I’d love for her to summon a demon beast,” Patten explains. In the comic, when a man stalks and corners Cadence during a hike through the wilderness, Cadence conjures and unleashes a wolf-like beast on the man, erupting with swirling ribbons of manifest rage. “I wanted to take this inner anger and let it explode into chaotic energy,” Patten says. “I took all these different elements about her to make that.”

The second woman featured, Morgan, has a secret, enchanted mask on the back of her head that terrifies an aggressive cat caller. “For Morgan, she was a very chill, non-violent person, so I wanted her power to be non-violent too,” Patten says. “I went with a kind of psychedelic, psychological power. I decided she was going to have a mask that scares people away so she feels safe, kind of based around how she has to put on a scary face in real life so she doesn’t get harassed in Seattle waiting for the bus.”

During their interview, Morgan told Patten about her interest in Japanese aesthetics, so Patten dove into the world of Japanese fine art for inspiration in depicting her particular power-up scene. The panel that emerged from that study, sparked by Keiichi Tanaami’s painting “The Uncrossable Bridge,” depicts Morgan’s floating mask radiating dazzlingly colored, pulsing waves of energy. “When I referenced ways to depict the powers for the comic, I didn’t really reference other comic books. I looked at a lot of fine art and art history,” Patten says.

When it came to depicting the women themselves, Patten struggled at first to find the right balance between achieving their likeness and pushing her own design. “When I did this project, originally it was about 50 percent natural, 50 percent stylistic,” Patten says. “But that ended up being this weird uncanny valley, so I ended up pushing for more like 70 percent stylized, 30 percent natural, because I wanted to be able to take their key characteristics and push certain features. That’s what character artists do!”

Patten’s process started with a series of full turnaround photos of her subjects. Then came the 2D concept drawings of their comic book superhero counterparts — a step she actually took with all 20 of her interview subjects. For the final three that made it into GRL PWR, once Patten had settled on her favorite iteration of their hero designs, she then translated them into a 3D sculpt. “The final comic ended up being based more around the 3D model than the 2D concepts, actually,” Patten says. “It was cool being able to turn the sculpt around and see all those details. You become very intimate with them in a way, more than you do as a still image. I believe it was a very powerful tool.”

Patten says she didn’t come to DigiPen initially interested in making comics herself. “I had done little slice-of-life daily gag strip things before, but nothing too crazy,” she says. But now that GRL PWR is done, she definitely sees more comics in her future. “I learned a lot of skills I want to cultivate!” Patten says. “I want to create more zines, small little 12-24 page projects, and even potentially work with other artists and writers too.”

In the meantime, Patten landed a contract as a character artist at Game Vision Studio, where she says her DigiPen skills have been coming in handy. “With my thesis, I decided I’d just treat my adviser and mentor like an art director,” Patten says. “I was like, ‘This is practice to go into the industry. Take their critique, take it well, do the changes, and move on.’ And that’s something I do every day now. Entering into the workforce was pretty easy because I’m not defensive about making those changes — I’m just committed to making my work better and better and becoming a faster artist.”