It was enough to get any gadget enthusiast excited. DigiPen graduate Patrick Martin used his smartphone like a wireless controller, steering a white robotic ball — otherwise known by its product name, the Sphero — around the Game Developers Conference expo hall.

Like an obedient electronic pet, the robot’s rolling trajectory responded smoothly and precisely to the touchscreen interface.

But there was more going on than the naked eye could perceive. By looking at the same scene through the camera lens of Martin’s phone, the Sphero robot was no longer a white ball but a cartoony critter running around in real-time across the convention center floor.

This was Sharky the Beaver, an augmented reality (AR) application Martin helped to develop as part of his work at the Colorado-based company Orbotix, makers of the Sphero.

“We’re finding the ball and we’re overlaying this character on top of it,” Martin says. “He’s a beaver, and he has a wooden shark fin on his back so that people think he’s a shark.”

In addition to the 3D character, the real-life backdrop was interspersed with floating coins that Sharky could collect on contact. Martin also demonstrated a food-throwing mini game in which players flicked at the touchscreen surface to toss digital cupcakes in Sharky’s path.

“Like when it gets close to his face, he’ll eat them,” Martin says. “And in this case you want to flick the cupcakes but not the vegetables.”

A lot of the time when I’m being introduced around the office, they’re like, ‘Oh, and this is the 3D math guy.’”

As a software engineer, Martin helps program the technology for making such interactions with the Sphero possible. Specifically, he deals in complex mathematics — lots of it. For a 2009 RTIS graduate with minors in both math and physics, it’s a welcome fit.

“There have been days where I’ve sat down and just punched matrices all day or solved weird linear algebra problems, and it’s just incredibly fun,” Martin says. “A lot of the time when I’m being introduced around the office, they’re like, ‘Oh, and this is the 3D math guy.’ So that’s kind of the reputation I’ve gotten now.” 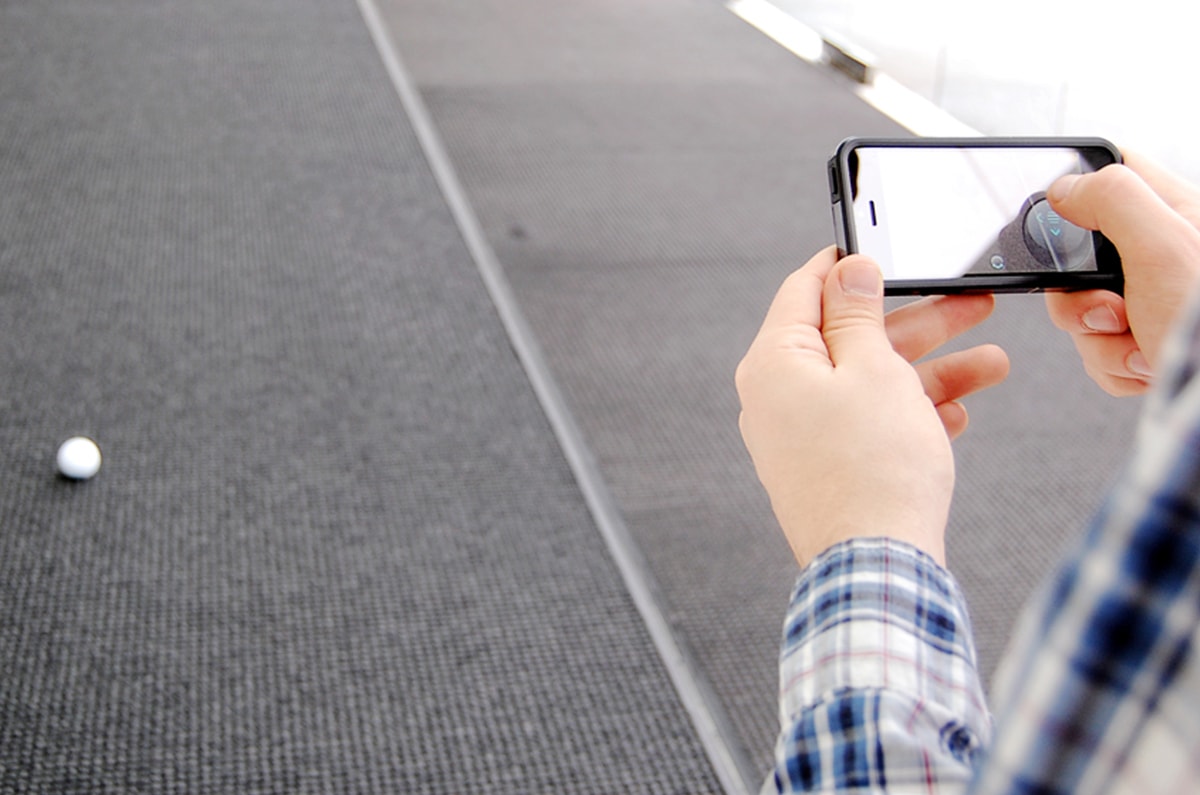 Prior to working at Orbotix, Martin was a programmer at Connecticut-based Venan Entertainment, developer of mobile and handheld games such as Space Miner: Space Ore Bust, a space-shooter RPG, and the iOS MMO game Book of Heroes. In addition to working on those titles, Martin was responsible for porting the classic Monopoly board game to the iPad and Mac OS X.

While his early days with the company involved plenty of low-level engine programming in C++, the studio’s migration to more social-based titles and gameplay mechanics also resulted in a gradual moving away from the type of work Martin most enjoyed.

“I was starting to miss all the 3D math,” he says.

I get to experiment a lot and see what works, what doesn’t, and do all this crazy stuff.”

In June 2012, Orbotix hired Martin to help develop AR technology for the Sphero. Unlike a traditional software or game development job, however, Martin’s responsibilities have gone beyond just making first-party products and applications. He also helps create the software development kits (SDKs) that encourage other studios and individuals to make their own Sphero applications for Android, iOS, and more.

In addition to launching an improved version of the Sharky application, for example, Martin’s team was also gearing up to release an augmented reality SDK with Unity plugin.

“It’s really exciting because it’s a lot of research and development,” Martin says. “I get to experiment a lot and see what works, what doesn’t, and do all this crazy stuff. And hopefully now that we have an SDK out, more people will do it better and faster.”

As a demonstration of the company’s open-source development philosophy, Orbotix launched a 2012 Sphero Hack Tour that hit seven cities across the United States. At each stop they held a 48-hour hacking competition that was open to the public, awarding over $12,000 to the teams that developed the most interesting and innovative projects using the Sphero.

Internally, the company maintains its own policy known as Hack Fridays — one day set aside each week for Orbotix engineers to tinker and experiment on any number of Sphero-related projects, some of which eventually turn into commercial applications.

That’s what I get really excited about. It’s kind of like this merging of the real and digital worlds.”

Martin says he has many of his own ideas he hopes to explore, such as an AR application that combines the Sphero with geocaching, or an arcade-style AR game along the lines of the Microsoft-published Geometry Wars.

For the time being, when he’s not busy honing and improving his own technology, Martin enjoys collecting other AR applications and following similar “mixed reality” trends in the game industry.

“There are the Skylanders and Disney Infinity [games] where they’re not AR, but they’re physical objects interacting with the digital space. So that’s what I get really excited about. It’s kind of like this merging of the real and digital worlds,” Martin says. “I’m just really into this market and seeing where it goes.”