When the members of DigiPen student game team Nuclear Lunch were brainstorming how to begin their junior-level GAM 300/350 project, they, like many of their peers, had a hard time settling on what kind of experience they wanted to create.

“We spent a long time trying to decide what game to make,” Benjamin Fox (BS in Computer Science in Real-Time Interactive Simulation), the game’s tech director, recalls. “Some of us wanted a combat-focused experience. Others wanted a narrative component.” In the end, he says, they arrived at a compromise solution that would cater to both.

Homeland: Lay to Rest, the game they completed this past spring, is a third-person action adventure that follows the exploits of a young monk who journeys back into the underground ruins of their childhood home, which was corrupted years ago by an evil force. Although it takes roughly 20 minutes to complete, the game packs in a wide range of features. Most revolve around the use of a chakram, a circular, hand-thrown weapon similar in appearance to the neon discs from the movie Tron. Homeland’s protagonist utilizes the chakram both in and out of battle — whether to fight off enemy golems, activate door locks, or quickly transport to specific locations on the map.

Inspired by elements from big-budget games and comic book heroes — everything from the web-swinging movement of Spider-Man to the shield-throwing combat of Captain America — the team looked to channel their influences into an appropriately-scaled academic project.

“Our biggest inspiration going into the creation of the game was Santa Monica Studio’s God of War (2018). When we had the idea for an action adventure game with a thrown weapon, we knew that was something we all needed to look at,” Michael Crouch (BS in Computer Science and Game Design), the design director on the project, says. “Early in the fall semester, all five of us designers even gathered to watch Raising Kratos, a documentary about God of War’s creation.” 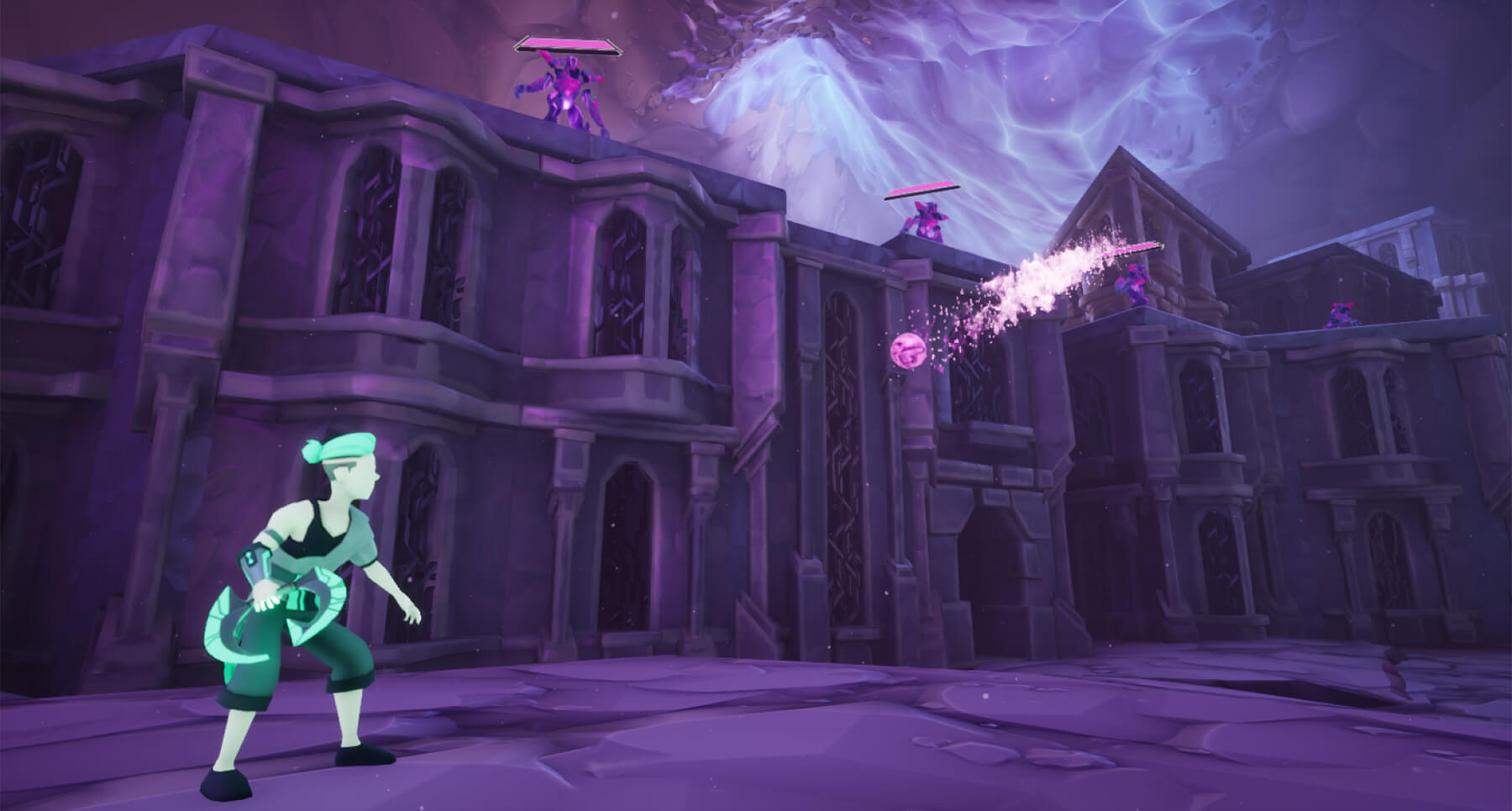 While most of the team’s members had previously collaborated on the same sophomore-level game project, the music-themed 2D brawler Mosh Pit, the prospect of making a 3D action adventure would require a bigger team. After hiring on new artists, the team size grew to 16 students.

“The majority of the team actually came together at the end of our freshman year. There wasn’t any formal hiring process or anything like that — just a bunch of friends who came together with the goal of making something awesome,” Shania Williams (BA in Game Design), the team producer, says. “Since we all had similar dreams for sophomore year, forming a team together just made the most sense. Once junior year began, we were able to bring on even more of our friends, and that’s when the fun really began.”

Unlike their sophomore project, which was made with a custom-built game engine, Homeland was developed using the Unreal Engine 4. Using a commercial engine allowed the artists to start working on assets right away, but getting familiar with the ins and outs of the software introduced an entirely new set of challenges.

“None of us had really ever used the engine before this project, so we were stumbling around in the dark for the first month or so, every now and then finding a light switch and showing everyone else how it worked,” Fox says.

As the art director for Homeland, AD Taeza (BFA in Digital Art and Animation) was responsible for establishing and maintaining a cohesive visual direction — as well as a documented style guide — for a team of six artists and animators.

“For style, we wanted to try something new that could work well in 3D, but still played to the strengths of the team’s concept artists. We ended up shooting for a simple, graphical look with cel shading and an emphasis on strong shapes. We also have very bold color symbolism that ties in with the narrative and the rising level of intensity as the player progresses through the game,” Taeza says. 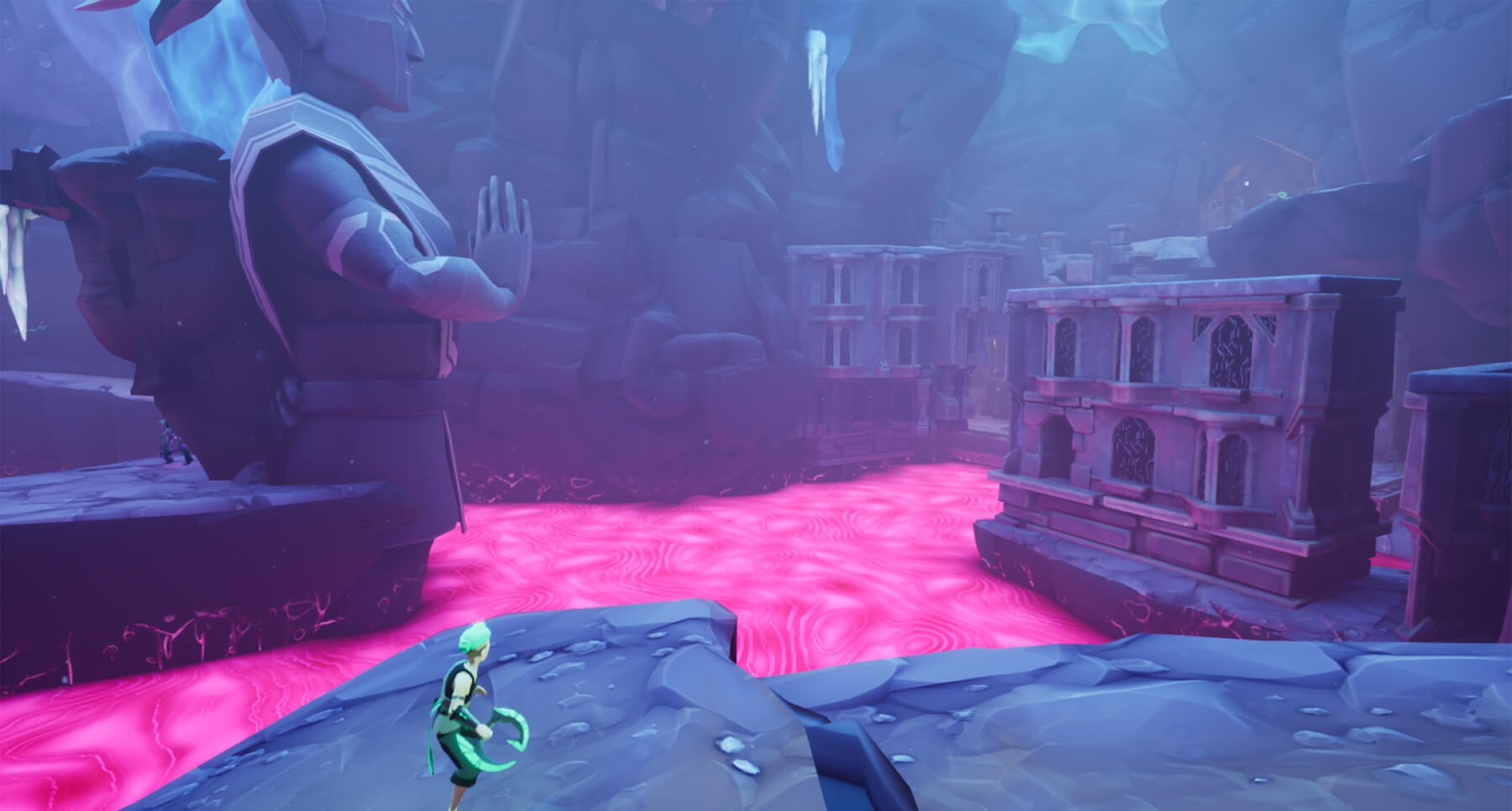 Indeed, as the protagonist moves further toward the game’s climactic boss fight, the player is treated to a series of impressive set pieces, from icy caverns to abandoned stone courtyards. Eventually, the 3D environments culminate with a run up to an enormous temple shrine, on a staircase surrounded by towering monk statues.

“We had a fairly ambitious project as far as visuals go, and only the minimum number of artists to see it through, led by an art director whose skill set was almost exclusively 2D. This made it doubly important that we played to everyone’s strengths as much as we could, that our pipelines and communication were as efficient as possible, and that we kept our morale up,” Taeza says. “Whereas our GAM 200 project needed a lot of character animators and only one person dedicated to environments, Homeland was somewhat the opposite — a majority of the art team had their hands in terrain, whereas only a couple were focused on characters.”

Much more than just a treat for the eyes, the Nuclear Lunch team also made sure to emphasize a well-paced experience that balanced combat, exploration, and world building.

“Overall, we wanted to create a combat-focused experience with interesting traversal to help break up combat,” Collin Cromwell (BA in Game Design), the creative director for Homeland, says. “Early on, our combat areas and traversal areas were completely split up … . This was meant to give a rest of sorts, but we found it to be disjointed and predictable, so we revamped a lot of our traversal areas to have pockets of combat.”

The Nuclear Lunch team also sprinkled the levels with hidden narrative components. By hitting a button to “resonate” with the environments, the player is shown glimpses of the past as represented by glowing phantoms — some scenes depicting moments of a terrible calamity while others hint at a more peaceful time that preceded it. 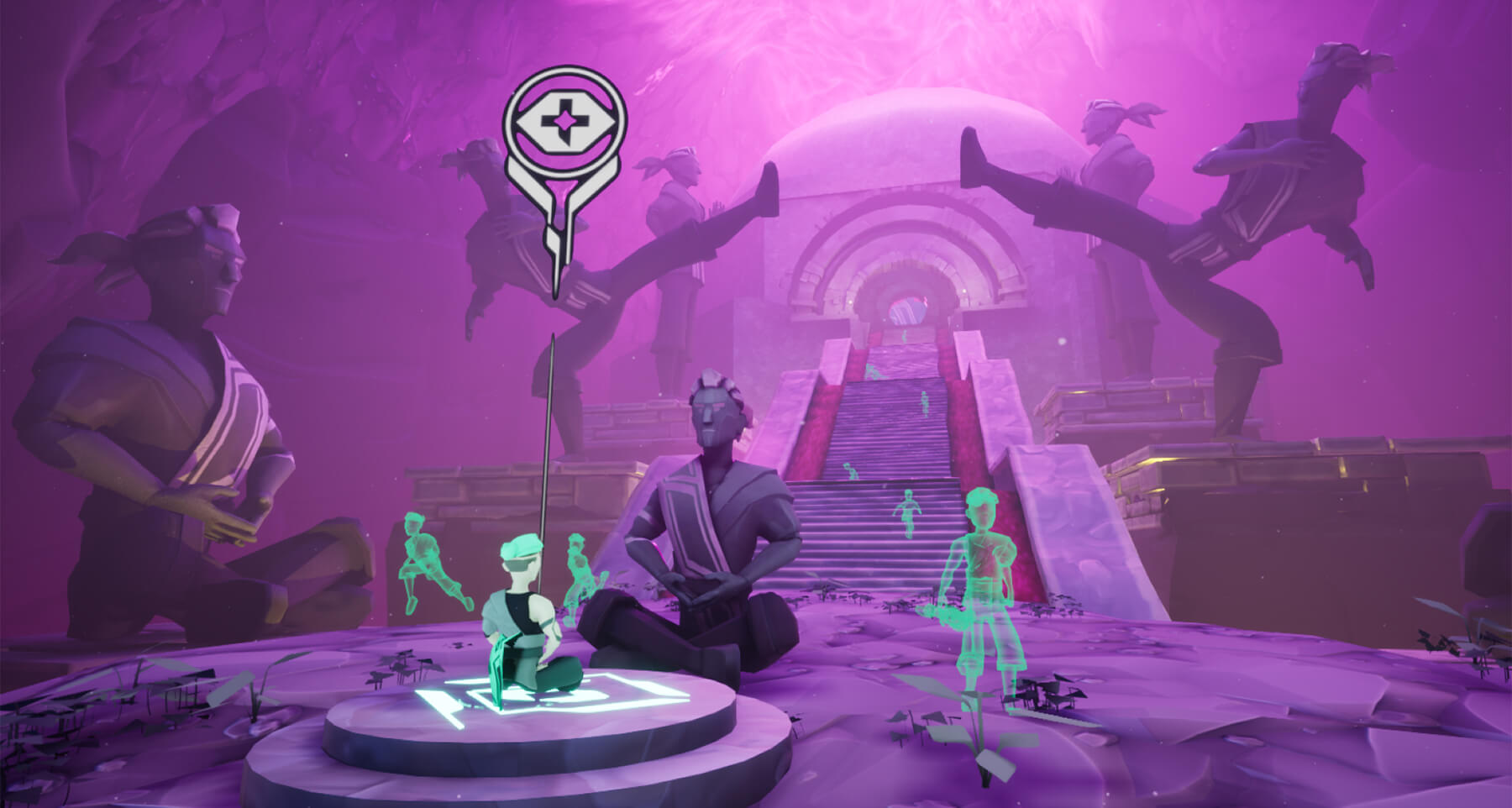 “If you look close, you can tell some things about the people who lived here and what happened. One of my favorites shows a group of kids playing with the golems that you fight in the game, letting you know they were not always against your people,” Cromwell says.

Even as the level layouts themselves were being constructed and glued together, other designers on the project were busy with refining the mechanics and interactions that informed the minute-to-minute playing experience.

“As it was our first time working on a 3D action-adventure game, a lot of it was trial and error of mechanics. Luckily, that’s how GAM 300 is set up. We had about two months to do nothing but try out mechanics and game ideas, the chakram being one of them,” Crouch says. “Playtesting was a huge part of refining the mechanics of Homeland, and we were making big changes right up until submission. At different points in development, you could stick the chakram into walls, teleport to it, have it bounce off walls, and even ride it as it flew around. Getting people’s responses to these mechanics is what led us to the ones we shipped with.”

Since the game was released to the public a few weeks ago, including as a free download on Steam, Homeland: Lay to Rest has generated several “Let’s Play” videos from players around the world. Even better, many of the students have gone on to internships at major studios, such as Activision (Crouch and Gabriel Ling), Blizzard Entertainment (Williams), and Epic Games (Fox and Jared Joyal). 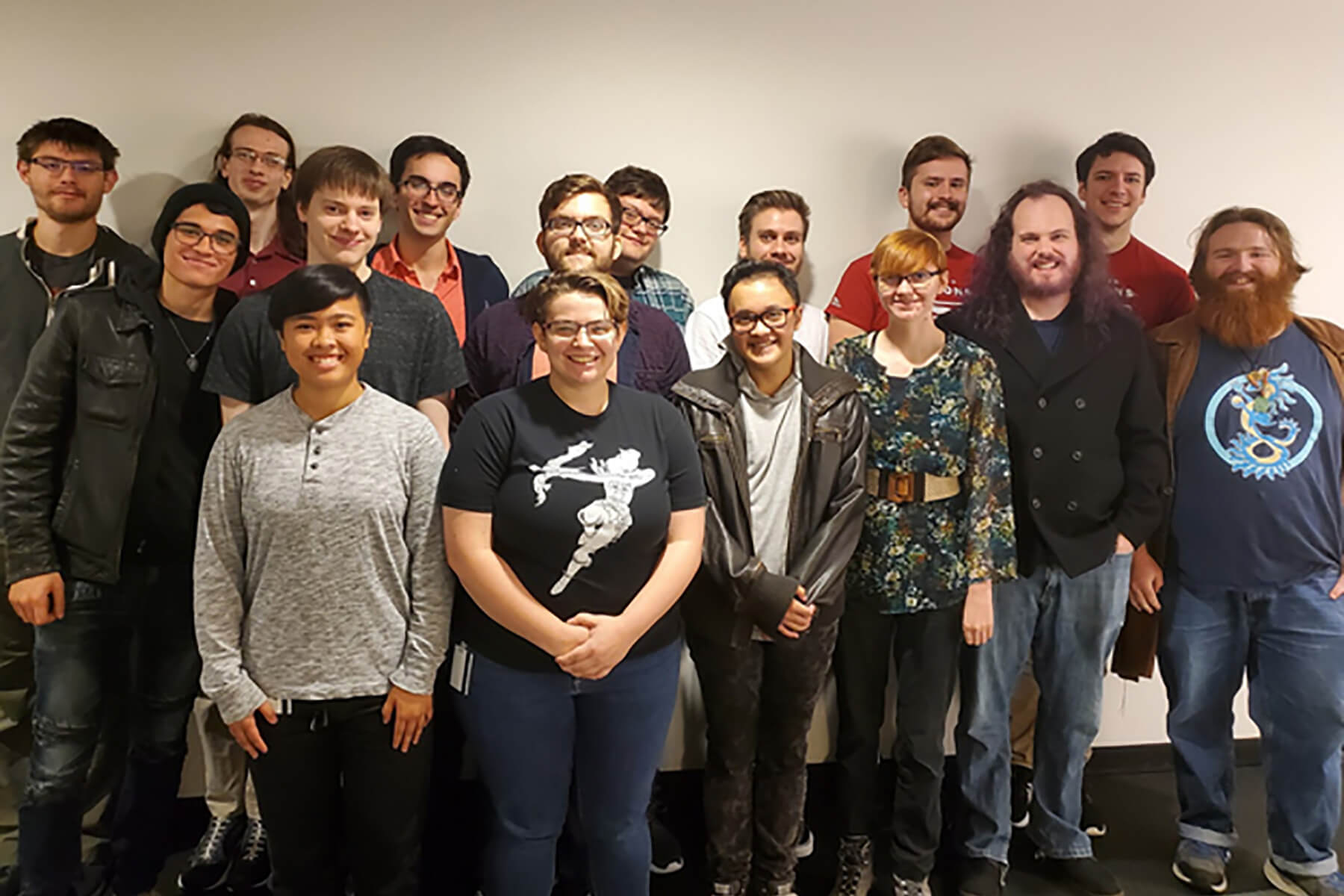 “During the fall semester, Epic Games sent a few representatives to the school for a company day. They came to take a look at our game, and it was really cool to show the people who made the engine we were using what we were doing with it,” Fox says.

From the art and design to the tools and audio, the Nuclear Lunch team members say they’re proud of what they managed to accomplish in just eight months of working together.

“Due to the nature of us all being students, a big part of our lives is readying ourselves to enter the industry. This ranges from having the necessary content in our portfolios to having a basic understanding of the game development process,” Williams says, reflecting on her role as team producer. “Seeing my teammates grow and ready themselves for becoming professionals is definitely one of my favorite aspects of the job.”

For another look at the making of a 2020 DigiPen student game, check out our spotlight on Recoil Riot.