The Blade in the Bark is a visually arresting game, but not in the same way that a flashy AAA title might be. Instead of uncannily realistic textures and dynamic lighting, there are pixels. Lots and lots of pixels, put to good use in ludicrously detailed pixel birch trees, menacing pixel wolves, and even gently falling flakes of pixel snow.

The game is a lovingly crafted pixel-art fantasy adventure à la Hyper Light Drifter or Titan Souls, both of which The Blade in the Bark’s creators, Team Isogon, cite as influences. Though it’s much smaller in scope, it has comparable polish to those indie hits. As YouTube indie game reviewer GSDBoxer put it, in a narrated play-through of the game, “I can’t believe this is from students!”

The game follows an unidentified heroine into the “frozen north.” She finds herself conscripted by a mysterious “God Tree” and forced to serve as its champion, armed with nothing but a shock of bright red hair, some magic runes, and a sword that only appears in the circles of moonlight scattered throughout the game’s tense, enmeshing environs.

The thing that was really important from day one was world building.”

“Many adventurers have trekked through mountain caves and over frosted fields, searching for secret treasures and magics,” the game’s opening sequence offers. “But few are so unfortunate to find themselves trapped at the edge of a sunset, forced to enter a forsaken realm of eternal night.”

Story is a huge part of The Blade in the Bark — the game is liberally peppered with glowing runes that rest next to interactive objects. Though many of these interactions have no effect on gameplay, the tidbits of story they offer slowly and purposefully flesh out the game’s world.

“Before DigiPen I was actually trying to be a writer,” says Nick Cameron, the game’s producer and one of its designers. “Something I’d been working on, because I just love doing it, was building a world.”

Ian Robb, the other half of the project’s design equation, seconds that, confirming that the game’s cohesiveness was no accident.

Much of the game’s overarching universe is never made explicit, leaving players to fill in the blanks using the details given them in-game, but there enough details that the world still feels rich with lore. The basic premise is that the heroine has gone adventuring in the north, when she is somewhat forcibly recruited as a champion for a “God Tree” being. This being is powerful but plagued by the malevolent force of an entity called the Nightmare, which the player must venture forth to combat.

“One of the core concepts was the idea was that in that universe there is darkness, and the world filters that to create life,” Nick says. “That is essentially what the god trees are.”

“A thing that bugs me in a lot of fantasy work is the idea of pure good and pure evil,” he says. “We have the darkness, right? But the idea isn’t that the darkness is evil and the God Tree is good. The idea is that there is this thing imprisoned under a mountain and its dreams are what create the darkness.” Indeed, the God Tree itself has some moral complexity to it, as it has essentially kidnapped the player, resurrecting them when they die and forcing them to continue fighting. The game alludes to past champions who have met with a less-than-pleasant fate after attempting to escape their duty.

With pixel art, you have to be very succinct. One pixel could make all the difference in the world, so you have to be super conservative with how you use your pixels.”

Speaking of that duty, combat is challenging but not vexingly so. Battles with the game’s chief enemies, wolves corrupted by the Nightmare, require patience and careful pacing. The player can only survive two consecutive attacks, they often face multiple wolves, and their sword is only effective in those circles of moonlight. Though death is common and impermanent for the player, it is permanent for the wolves, an element that Nick and Ian considered carefully. They wanted to give the game world a sense of persistence, they say, but also to keep players from getting fed up.

“That’s going to be a ragequit for most players!” Nick jokes, reflecting on the possibility of having to ceaselessly retry the game’s tougher fights. Robb notes that one of the most difficult parts of properly balancing the wolves was the fact that making the game also made them extremely good at it.

“That was really hard for balancing the game,” he says. “We were so good at it, and there were bugs that would only happen if you weren’t really good at the game, which means we never saw them.” 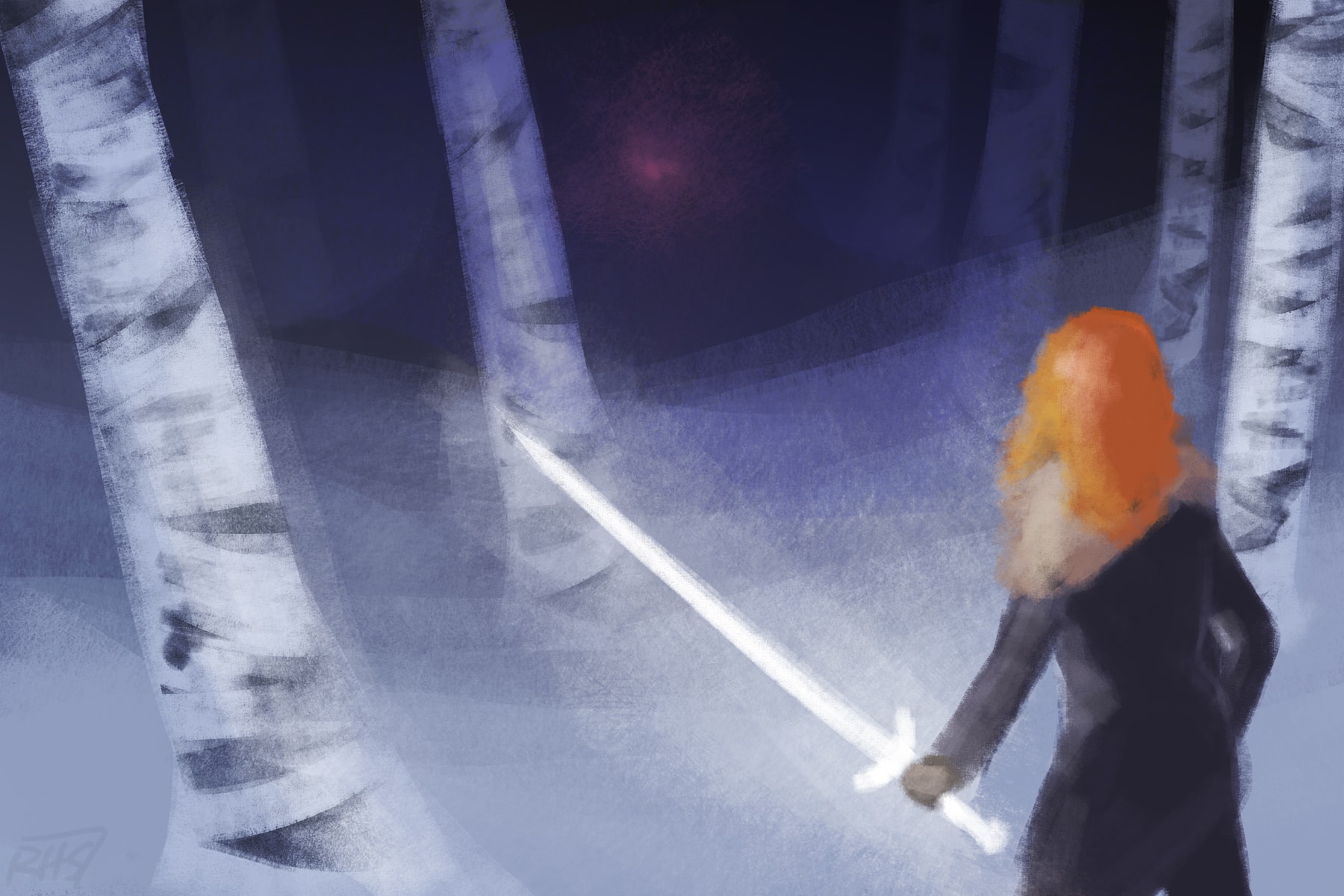 Combat depends on a carefully timed combination of attacks and evasive rolls, both of which replenish on a cool-down timer. However, these moves are temporarily restricted by the number of magic runes the player has collected during their progress through the game, which adds an element of time and resource management to the combat mechanics. Players start equipped with three runes and can acquire a maximum of four more.

The “God Tree” itself is rendered in stunning detail and serves as something of an artistic centerpiece for the game. And though that gorgeous pixel art might look like it’s not very difficult to make, it’s a painstaking process, says Miki Bishop, the game’s art lead.

“With pixel art, you have to be very succinct. One pixel could make all the difference in the world, so you have to be super conservative with how you use your pixels,” she says. She notes that each frame of an animated object must be created by hand in Photoshop, culminating in numerous detailed sprite sheets for each object. The art team also had to learn several important techniques from scratch. Pixel art, while popular, represents a very specialized style of art direction.

Everyone felt like they had agency in what the vision of the game was.”

“I started dabbling in it during the summer before sophomore year started,” Miki says, “but then when I brought on the other artists, they had to also quickly learn how to make pixel art look good.”

Given all the difficulties inherent to it, why did they go with pixel art? Though its distinct look definitely helps draw players in — that phenomenon was evident from the reactions of passerby at PAX West — they had some loftier ambitions for the medium.

“We wanted to elevate it to the point where it was sophisticated,” Miki reflects. “We definitely wanted it to feel like a part of what we were trying to make. Like it wasn’t just a style choice, it was, ‘This feels right.’” Indeed, the visual design integrates so well with the game’s mechanics, sound, and story that it’s hard to imagine it in any other format. The result is palpably affecting.

“The artwork and audio in The Blade in the Bark is superb, conveying a deep sense of dread as you explore deeper into the woods — especially thanks to the high stakes combat that can see you easily perish if you make one silly mistake,” reads a review of the game on Alpha Beta Gamer.

“It was a challenge but I think we nailed it in a lot of respects,” says Miki. So did their fellow students, apparently, as The Blade in the Bark won Best 2D Visual Design, Best Sophomore Game, and Most Poetic Experience at the 2016 DigiPen Game Awards.

Like many of their fellow game teams, Team Isogon put in plenty of extra hours to make the game what they wanted it to be. Many of Team Isogon’s members are neighbors, and late-night work sessions at their various apartments were standard.

So how did they keep everyone motivated? Team members point to a spirit of shared empowerment. Their team name, Isogon, is an object in which all sides are equal — a neat illustration of the team’s guiding philosophy. “I think one of the reasons that Blade in the Bark has such a cohesive aesthetic and why I think that what we made seems to fit together so well is because everyone felt like they had agency in what the vision of the game was,” Nick says. The different sub-teams also took pains to keep their teammates in the loop, which Miki cited as being crucial to collaboration.

“The team understands each other and where they’re coming from,” she says. “Most game teams, when an artist would ask a question like ‘Why wouldn’t this work?’ some programmers would probably say, ‘Oh, it’s too complicated to understand, so we’re not going to explain it to you.’ But our team actually goes out of their way to explain it to us. Our dynamic really helps us prepare for how important team-building is [in the industry].”

And when empowerment and shared investment aren’t enough, Ian jokes, there’s always the need to simply keep pace with the person next to them.

“Everyone’s got that process of like, ‘That’s so cool! I need to be working as hard as you are,’” he says.