Working on multidisciplinary, collaborative game team projects is a cornerstone of all four years of a DigiPen education. Read on for a breakdown of senior year game projects.

By the time students reach their senior-year game projects, things open up considerably. “The earlier GAM classes have a very clear, strict rubric of what students must do to get a particular grade,” senior game project instructor Jen Sward says. “In the senior class, the standard is about being professional. ‘Are you doing something that feels professional? Would you pay money for this?’” What that “something” is depends completely on what seniors hope to do once they graduate, making senior projects the most mutable of all game project years.

“One of my fundamental and underlying principles behind senior projects is that I want them to be working on something they love,” Sward says. “I also want something that will help them in their career, so it’s very much about transitioning from being a student to a professional. A lot of the class is talking about what their dreams are, what they want to be doing when they graduate, and what kind of project they could be working on to fulfill that.”

A lot of the class is talking about what their dreams are, what they want to be doing when they graduate, and what kind of project they could be working on to fulfill that.

While senior game projects typically take the form of a professional level 3D game, they can assume many other shapes as well. “Mobile games, VR, AR, 2D games — we’ve even had students do physical card games, a touch-controlled air hockey table, and a game controlled by sand. We’re all about those things. It’s very open,” Sward says. Seniors may also join junior game teams, in which case they’ll need to balance the requirements of the junior project rubric with their individual senior-level requirements. Teams may also choose to continue developing, expanding upon, and polishing their junior game projects during their senior year, resulting in student games with two-year development periods.

Seniors are required to keep detailed logs of their work and goals for each week, do in-depth research on development methods used in existing games, and analyze industry talks on a variety of subjects. “If I’m doing AI in a first-person shooter, I’m asking myself, what has been done in other games?” Sward says. “What’s the current industry standard? How can I then evolve that, or have it fit in with what our game is doing? We really want people to be analyzing what is out there, bringing that in, and then turning it into whatever they’re working on.” Seniors submit a paper at the end of the semester, summarizing that research and the impact it had on their project’s development, while also detailing their successes, roadblocks, and everything in between. 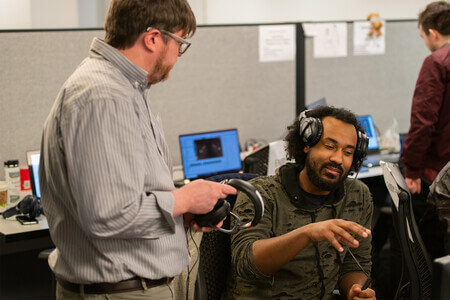 Since many students start internships their senior year, which also fulfills game project course credits, it’s common for students to rotate in and out of senior game teams rather than staying for the entire two-semester development. “The project may be two semesters, but then someone will leave for an internship after the first semester and someone else will join, or the team just continues at a reduced number,” Sward says. Students working on teams for one semester typically focus on work that can later be utilized by the team in their absence. “That could be making a tool like a level editor, shaders needed for a game engine, or doing narrative character development that can be handed off once completed,” Sward says. “It’s very much like being in a company, where you don’t necessarily work start-to-finish on a single project.”

We cover everything we as instructors wish people had told us when we graduated and got our first jobs in the industry.

Although seniors have the option of doing solo projects, students are highly encouraged to form teams the same way they did in previous years, given that work in the game industry is rarely done solo. “We’ll take a look at individual students’ resumes and portfolios and see where they have holes,” Sward says. “The point is, work on the thing you want to work on, really make a decision about what you want to be doing, and carefully consider how to make your own work shine for potential employers.” Oftentimes, that means working with instructors throughout the dev process to discuss methods for highlighting individual work in a professional interview setting.

“Let’s say your team has 10 people, and two people are doing AI programming,” Sward says. “How is your AI programming going to be seen by a potential employer? Is it a key press that changes the camera angle so you can see what the AI is doing better? Is it a cheat code that quickly gets us to a specific area of the game you did? It’s really being thoughtful about the work you’re doing and how you can easily demonstrate that work.”

Senior project class lectures place a heavy emphasis on career prep as well, covering resume and portfolio preparation, common types of interview questions, the ins-and-outs of job contracts, and what to expect from your first week at a company. “We cover everything we as instructors wish people had told us when we graduated and got our first jobs in the industry,” Sward says.

Anatomy of a Game: Junior Year