This is the second installment in a two-part story about the making of the student game Arc, developed by Team Paragon. You can read Part 1 here.

Toward the end of the fall semester, as the artists and programmers of Team Paragon marched closer toward their goal, it was clear the team needed someone who could begin focusing their attention solely on using the available art assets and set pieces to create the actual racing levels for Arc.

For that, team members recruited the help of Nick Miller, now a Class of 2014 graduate from the B.A. in Game Design program, who over the course of several weeks practiced working with a custom-built level editor developed by team programmer Danny Frisbie.

While the team had at one point envisioned a series of connected one-way tracks, each featuring a distinct type of environment, time constraints would have prevented the team from building enough tracks to the level of polish that they all felt the game deserved.

“I could build five tracks, and we’d be able to make one of them look pretty,” Miller says. “So what we ended up doing was sort of compressing this idea into one track that sort of passed through all of the environments.”

And then the last area is saturated with particles and has this sort of brilliant blue color.”

Relying largely on clever lighting tricks, Miller and the team turned their racing track into a dynamic tour through a succession of tunnels, desert expanses, mountainside rushes, magma-filled caverns, and more.

“And then the last area is saturated with particles and has this sort of brilliant blue color and glyphs everywhere,” Miller says. 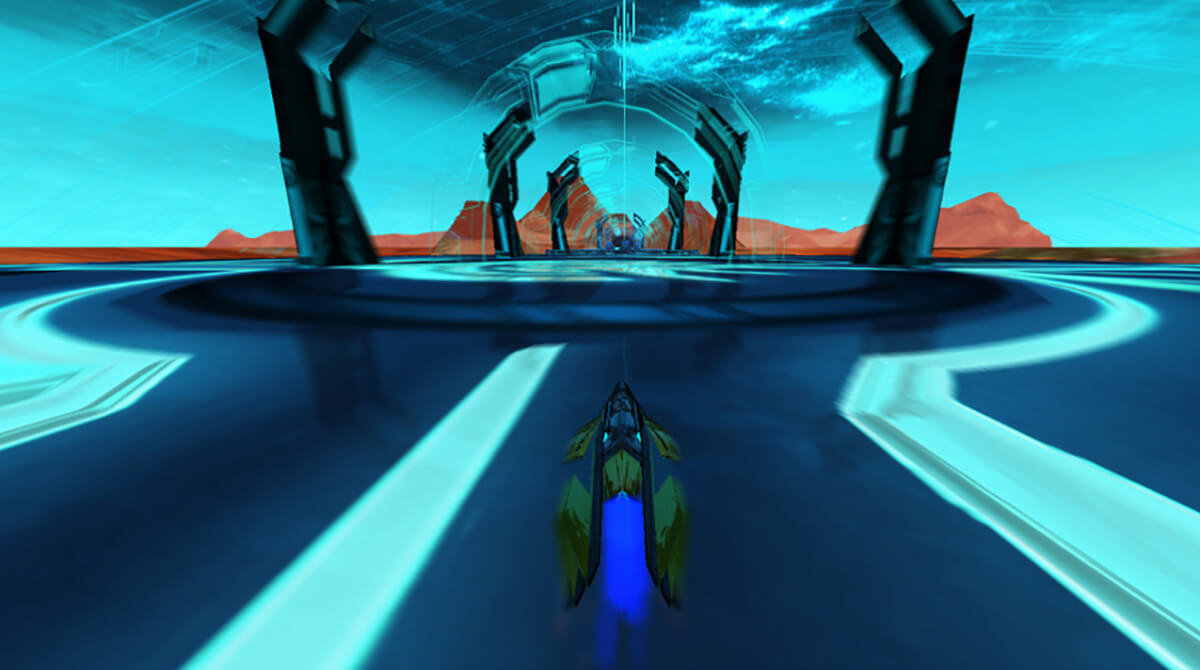 In all areas of art, design, and technology, Team Paragon members described the making of Arc as a continuous process of trial and error.

“It’s the game that made itself,” Frank Aliberti, a team artist and 2014 graduate of the M.F.A. in Digital Arts program, says. “We were just there to support it, because we had an idea in the beginning and it became its own thing — and we just went with it. Everyone that had a good idea on the team would put that idea in practice, and if it worked we would use it. If it didn’t work, we didn’t use it.”

But making the game also involved a substantial time commitment from everyone involved.

Everyone that had a good idea on the team would put that idea in practice, and if it worked we would use it. If it didn’t work, we didn’t use it.”

Throughout development, the members of Team Paragon devoted their Saturdays to a series of mandatory group work sessions at team producer Eric Lynum’s house, where they would eat breakfast at 9 a.m. and work until at least 4:30 p.m. — and typically much longer than that, often winding down with an evening Halo tournament.

Not only did the weekend sessions help to keep all of the team members on the same page for accomplishing tasks; it fostered a spirit of camaraderie that made it all the more enjoyable to work on the project.

“It’s really cool to work alone, because you get to do whatever you want,” team artist and returning senior Katie Arrington says. “But you really do miss out on the collaboration that happens, and I think that was my favorite part about being a part of this team.”

The people I met on this game, they are absolutely amazing professionals.”

In the end, team members say that having a larger team didn’t actually save time on the project, but it allowed them to create a type of playing experience that would have been impossible to achieve without so many talented contributors.

“The people I met on this game, they are absolutely amazing professionals,” Aliberti says. “I think it’s natural that if you get a bunch of people that think and act the same way, you will have a successful product at the end. I’m a strong believer in that.”

“There’s always room for improvement, like with everything, but I’m pretty impressed with how we were able to stick to our vision from the beginning,” Arrington says. “I’m really excited to work on something new, based on all the stuff we learned here. It makes it less intimidating to take on another project.”

Arc is available as a free download from the DigiPen Showcase.