DigiPen instructor Ken Turner can trace his fascination with clay all the way back to his early childhood.

Growing up around Bellevue, Turner recalls going out into the nearby ravines, carving faces into the clay-rich ground. He still holds onto an unfired clay figure from his middle school years, one of several he sculpted in his spare time using the images in a Mad magazine issue as reference.

It was watching the clay in his hands transform from nothing into functional pieces. It just blew me away.”

“It was watching the clay in his hands transform from nothing into functional pieces. It just blew me away,” Turner says. “I knew right then and there, I had to learn how to do that.”

He soon began taking pottery courses at his school and was immediately hooked. Turner studied under Reinholdsten and eventually other instructors at Peninsula Community College and the Kansas City Art Institute. In 1983 Turner returned to the Northwest to build his own home studio and kiln.

For the first several years of his career, Turner says, he created almost purely functional pottery pieces, which he exhibited and sold through galleries and events. Before long, however, he began to notice a change in the local scene. At annual events like the Bellevue Arts Fair, more and more people were selling functional pottery. Turner felt compelled to make his work stand out.

“Microsoft came in. There were big palaces being built all over the place,” Turner says. “And I figured these people need to decorate their houses, and they should all have Turner pottery in there.”

He recalls one particular breakthrough that came about while preparing for a solo exhibition at the Northwest Craft Center in Seattle. Turner was in the process of creating a series of ceramic vessels in stark black and white. It was meant to be new and dramatic, but when he fired the pieces in the kiln just two weeks before the show, the “magic” — as Turner describes it — was missing.

“Normally, you open a kiln — it’s like Christmas. Things are singing. And it just wasn’t,” Turner says. “I could just feel the blood rushing out of me.”

That’s when he says he remembered having a two-ounce vial of gold. He began decorating some of the pieces with accents of the precious metal. Turner fired the pieces overnight and returned to find that the work had indeed come alive.

“There are little jumps that artists take. Sometimes they work really hard for it. Sometimes it just happens,” Turner says. “And you just have to be open to see.”

Today, Turner oversees the DigiPen ceramics art lab, a new working space he helped design and build during the fall of 2012.

“Cleaning is huge in any ceramics studio,” Turner says with a friendly grin. “I tell students it’s 90 percent of the work and probably 50 percent of their grade.”

As senior lecturer for DigiPen’s courses in hand-building and wheel-thrown ceramics, Turner helps students channel an ancient mode of art that might at first seem out of place for such a technology-oriented school.

Surprisingly, he says, it’s the computer science students who seem to enjoy his classes the most.

“It really has been the RTIS students who have taken advantage of what goes on in here,” Turner says. “Some of them I’ve noticed kind of turn this into their little reprieve. They just get off the computer for a couple hours and come down and kind of replenish and relax, because when you’re working with clay your mind just goes to another place. You’re not worried about other problems.”

It’s hard to stay away from once you get to a certain level working in clay. You get it under your fingernails, and it just becomes a part of you.”

While many students might not return to the potter’s wheel after their classes are finished, Turner says he hopes to give everyone the knowledge and encouragement to make pottery, if not a lifelong passion, a creative outlet to explore again later on.

“It’s hard to stay away from once you get to a certain level working in clay,” he says. “You get it under your fingernails, and it just becomes a part of you.” 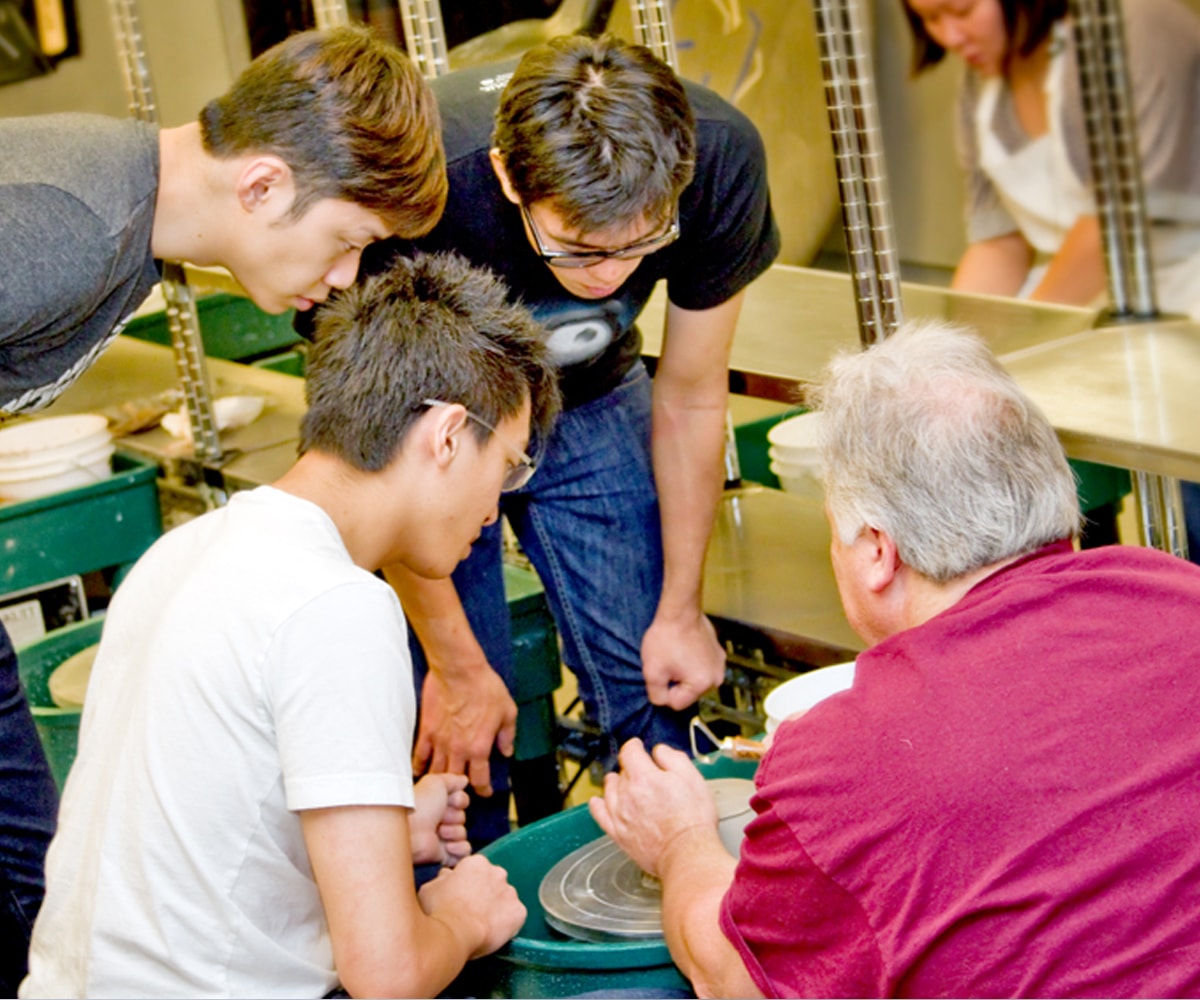 Turner’s artwork has been included in the permanent collections of the Northwest Museum of Art & Culture, the Museum of Northwest Art, the American Museum of Ceramic Art in Pomona, California, and many other private collections. He will be a presenter at the American Ceramic Society Potters Council in Minneapolis in October.