If you’ve ever shot peas at undead hordes, you’re probably familiar with video game artist Rich Werner’s work. Before teaching at DigiPen, Werner served as the lead artist on the original Plants Vs. Zombies by PopCap Games, a classic title that helped popularize the tower defense genre thanks to his eye-catching character design, UI, animation, VFX, and title art. Today, he passes on his industry expertise to DigiPen art and animation students, instructing sophomores in 2D game art and seniors in concept art. Having created a few iconic characters of his own, we asked Werner which five character designs from gaming have inspired him the most.

“Character designs for games these days are so complicated and complex that I thought I should dive in and pick five of the best designs from video games of the past,” Werner says. “These are back from when you had to design characters that adhered to the restrictions of early consoles, and yet they’re still some of the most iconic characters of all time.”

Here, in his own words, are Werner’s top five picks. 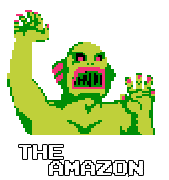 This one is pretty obscure, but I just loved Pro Wrestling for the original Nintendo Entertainment System. It was Nintendo’s take on an American wrestling game, and it had a lot of very memorable and original characters in it. The best design of them all was a character called The Amazon, whose design is awesome because it resembles The Creature from the Black Lagoon. I’m a huge classic monster fan, so it was perfect for me. What’s impressive is you can still make out that it resembles the Black Lagoon creature, even though it was created with 8-bit pixel technology.

Blanka from Street Fighter 2 was a great character design. I loved it because it wasn’t just based on a human being. Since he’s a monster, you can make out Blanka really easily from the group. He has such distinguishable features — the huge lion’s mane for hair, and the way he’s hunched over while he’s walking is the best. It just felt cool to play as a raging monster that can launch itself at you, crunched in a ball, and shock you with electricity. He had a bit of a backstory in his design as well. The chains around his ankles convey that he’s escaped from somewhere, possibly held captive and exploited. He also has a recoil when backing up, which shows he’s somewhat scared and not just a mindless angry beast. The torn pants make it seem like perhaps someone transformed into this creature, similar to The Incredible Hulk. All in all, Blanka’s just a great design.

For game character design, Earthworm Jim was groundbreaking. It’s pretty rare for a design like this not only to get green lit, but also to be featured in an entire game based on its own universe. I love everything about this design. How could you not love a character that is basically just a worm inside a robotic humanoid suit? Proportionally, the suit also helps you make out the character a lot better as you play the game. Earthworm Jim has a lot of personality in his animations too — I love how his mouth goes off of his head and how his eyes are different from one another. You can tell a lot of love went into his design and that a lot of that time was spent working on his backstory. It’s all dripping with originality.

Mario is one of the most recognizable characters in all of video gaming. The design is absolutely amazing. To be able to create a character with recognizable facial features using only three colors and a height of 16 pixels is just incredible. His character is instantly recognizable on the screen. You can make out everything about his design, from the hat, to the moustache, to his suspenders. Not to mention the fact that the character is a short, pudgy plumber with a moustache, beloved by millions. That’s pretty impressive on its own.

Pac-Man is a superior character design for so many reasons. It doubles as graphic design the way it just pops off the screen. It’s easily recognizable without being complex in any way. He’s basically a pie chart with a blank space for a mouth that chomps as it moves, and a simple black dot for an eye. It doesn’t get more minimalist than that. The Ghosts are equally amazing designs, so I thought I should give them a shout out here too. I may be a bit biased, however. Pac-Man is my all-time favorite video game.