The last time we caught up with DigiPen graduate Heather Gross (BFA in Digital Art and Animation, 2012), she was taking a well-deserved break from the world of video games. Having worked as the art director for the award-winning indie adventure Oxenfree, she was ready to explore new avenues for making her living as an artist.

When asked what she’s been up to in the meantime — well, it’s a little hard to keep track of everything. From a Kickstarter campaign to another video game project and a few books under her belt, she’s kept herself busy. That’s on top of all the personal artwork she continues to create, largely consisting of incredibly cute bunnies, dragons, and other bug-eyed creatures posted to her personal website and Instagram account. 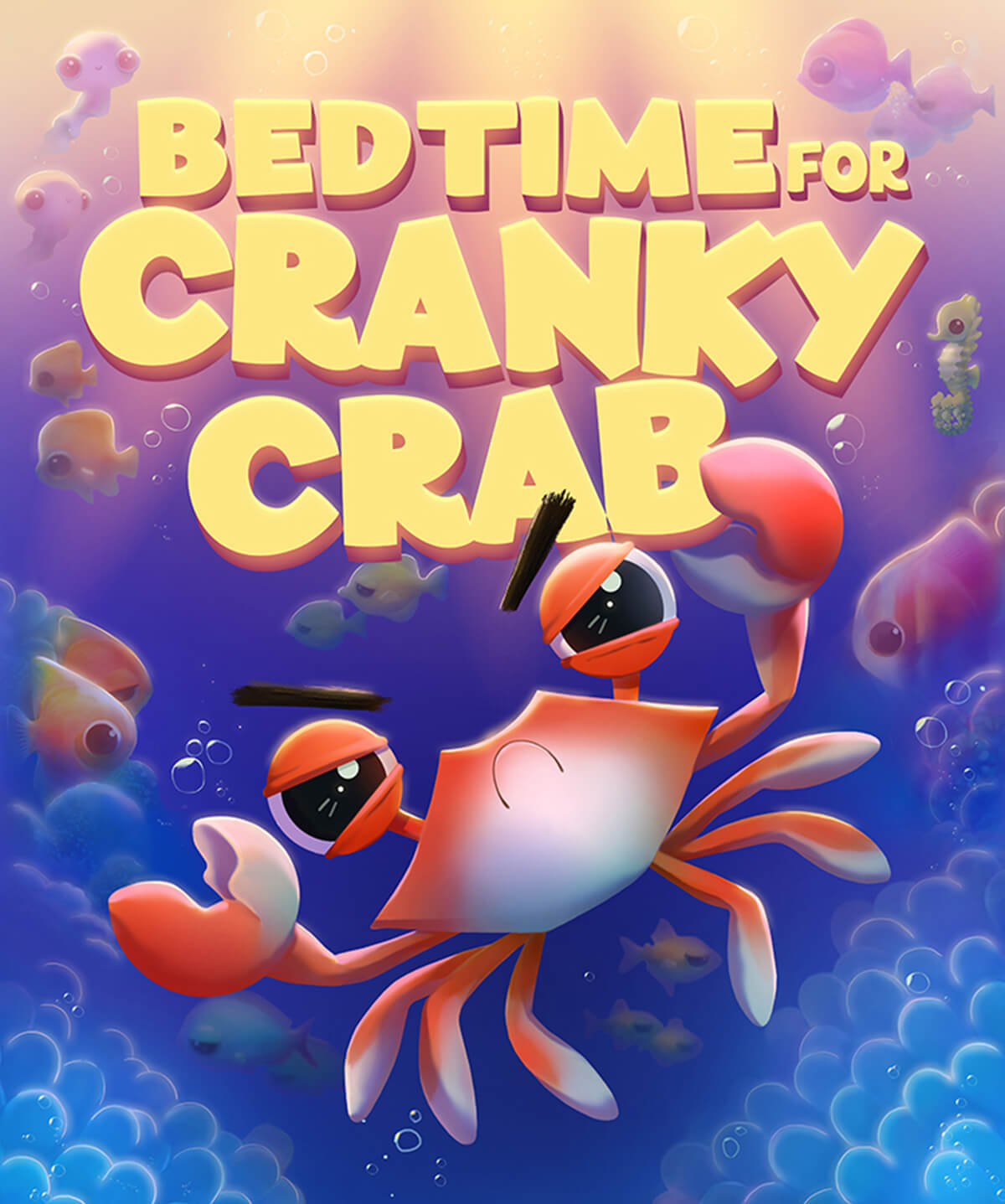 On her latest major project, Bedtime for Cranky Crab, a Scholastic children’s book that she spent much of the past year illustrating, Gross brings an entire underwater ecosystem to life. Written by Cristina Ergunay, Bedtime for Cranky Crab tells the story of a stubborn crustacean who insists on staying up, even as the rest of the sea’s creatures get ready to sleep the night away. As the sunlight fades and the colors of the ocean water turn dark, the little crab gradually finds himself lulled into a peaceful slumber.

While this marks the third book she’s illustrated, it’s the first one released by a major publisher. In addition to illustrating a book about a baby sea otter called The Greatest Treasure, she previously collaborated with fellow DigiPen graduate Marisa Erven on an art book titled Fantasea.

In the case of Bedtime for Cranky Crab, the opportunity originated from an email she received from a Scholastic representative who had noticed her artwork online.

“They got in touch with me, saying, ‘Hey, we want to work on something. We don’t know what it is yet,’” Gross says. “So we played it by ear for maybe two years, and they finally approached me with a story and asked if I was interested in it.”

When the Scholastic representative pitched a story by Ergunay about a cranky crab who refuses to go to bed, it didn’t take long for Gross to respond. “I’m like, ‘Of course! How did you know I would love to do this? I’d love to do a story about a little cranky crab!’” Gross recalls. “And they were like, ‘OK. Why don’t you give us an idea of what that might look like?’ And so I said, ‘I’ve already got it. Here you go.’ Because I’d already drawn a cranky crab that I’d posted on my Instagram a long time ago. The second I read the script, I thought, ‘Oh my God! It’s this cranky crab in particular.’ So I sent them the picture, and they’re like, ‘Yes. Perfect. We love it.’”

After a few more exchanges to discuss the general tone and visual outline for the story, Gross received a full layout from the Scholastic team, with the text placement on each page of the 24-page book. With that, she got to work on illustrating.

“I picked the scenes I thought would have the most sea animals in them or would be the grandest pictures, because then I could take all the information I drew from those ones and just apply it to the other ones,” she says. “I sketched out the ones that came to me the most easily first. That’s just how I usually go. Path of least resistance usually works.”

As with any major project, however, not everything was easy all the time. Having been given close to a year to complete her illustrations, Gross says the pressure did get to her, leading to periodic episodes of burnout. When asked about what was most challenging, Gross says it often boiled down to knowing when to step away and when to come back.

“Sometimes you can really get so fixated on it, and I feel like that’s what leads to the burnout, where I am trying way too hard on this and it needs to come more naturally. That is probably the reoccurring theme,” Gross says. “My expectations are just too high, and it’s not fun anymore. And that’s always the indicator for me. When it stops being fun, then I’ve veered off the path of creativity.”

When it came time to wrap up the project, Gross says she found inspiration during a trip to Hawaii, where the beautiful sunsets and oceanic surroundings — including a chance encounter with a sea turtle while swimming with friends — helped her to “get that last vibe.”

Throughout the process, Gross says she maintained a great relationship with the people from Scholastic.

“They’re a bunch of sweethearts. I really enjoyed working on it with them, because the feedback was always, ‘Cute! More cute! This is great. Give us more cute!’ I’m like, ‘OK. I can do that. I love cute,’” she says.

Aside from the book projects, Gross dipped her toes back into the world of video games during the past two years, providing concepts and marketing artwork for the experimental Cat Sorter VR by Pawmigo Games. That game won the Aesthetic Award at the 2017 IndieCade festival. Gross says she’s also currently working on another video game collaboration that has yet to be announced.

In 2019, she successfully launched a Kickstarter project for a plush toy named Fwoof the Bat. For the pitch video, she presented the story from the perspective of Fwoof, who flew too far from his family and needed help being reunited with his kin.

“It was a fun challenge. How can I innovate and make it a little less simple but more fun?” Gross says.

Having dabbled with a number of different vendors and types of merchandise such as prints, plush toys, apparel, and more, she says she’s still experimenting with new ideas to build and expand her personal brand.

“My friend got a laser cutter, so we’ve just been trying to test out different kinds of product that would work, because I’m trying to work more towards functionality versus, ‘Here’s something on your wall,’” Gross says. “At the end of the day, I want it to be something that people can get a lot of use out of and always have with them.”

What’s unlikely to change, at least for the foreseeable future, is her predilection for all things cuddly and charming. Looking back, she says, even as a teenager, most of her sketches involved drawings of her pet rabbits, cats, and renditions of her favorite media characters like Sailor Moon. It was mostly during her time at DigiPen that she learned to move beyond her natural affinity for cuteness in the pursuit of expanding her artistic capabilities.

“Somebody in the industry was like, ‘I don’t know. This is too cute. Like just — stop with the cute.’ And they were totally serious, and so I tried burying it for a while. Like, OK. I can do not cute, and that’s fun too,” Gross says. “But it unearthed with a vengeance, and it hasn’t released me since.”

If there’s any advice Gross has for other artists, it’s that everyone is different. A process and routine that works for one artist might not work for everyone else. But if there’s any lesson to be passed on from her own experience, it goes back to the issue of burnout.

“If you’re suffering from something, or if it feels really hard, it’s because something needs to balance or tip in the other direction. And don’t ignore that. Don’t overwork yourself. There’s this idea that’s glamorized maybe a little too much, like, ‘Oh, what a wonderful person, working themselves to death. So selfless!’ It’s like, no. Be selfish,” Gross says. “Be very selfish. If you aren’t, then you can never be selfless for other people because there’s not enough of you. You can’t create cool stuff when you’re feeling like that.”

Cody Luitjens Is Living the Stream at HBO