﻿﻿﻿Working on multidisciplinary, collaborative game team projects is a cornerstone of all four years of a DigiPen education. Read on for a breakdown of freshman year game projects.

Game team projects start out small in scope and size. For one, only students in DigiPen’s computer science programs and BA in Game Design program craft game projects their freshman year — in GAM 100/150 and GAM 120, respectively.

“The most important thing you can take away from GAM 100 and GAM 150 is a love of problem solving,” says freshman computer science game project instructor Justin Chambers. “It may be people problems or code problems, but there is no recipe for making a game. You have a handful of tools and some best practices, but then you just have to experiment, see what works, and solve problems in new and clever ways.”

Design students, meanwhile, have a slightly different aim in GAM 120. “At the end of the class, they should have a game that represents them and their creative voice, shows off their emerging technical skills, and proves they understand that games are about connecting to a player who is having an experience,” says freshman design game project instructor Boyan Radakovich. “They should also learn how to work on a rapid prototyping team. The focus is on the process of creating something, iterating, and playtesting.”

Freshman computer science students learn to make games using the C programming language, creating everything but a small pre-provided graphics library from scratch. Rather than making one large, year-long game project like students do in subsequent years, freshmen computer science students make a number of small game projects of varying size. During the first half of the fall semester in GAM 100, students create a series of simple games as individual assignments. In the second half, they collaborate on a three-person team project. Then in the spring, during GAM 150, students form five-person teams and collaborate the entire semester on a single game project.

We want something students will be proud to show their friends and family, where they’ll say, ‘Wow! You did this?’

“We do icebreakers and get-to-know-you activities during the first half of the semester that help students find potential teammates, and then the team forming is all very organic,” says Chambers. “Short projects and small teams early on allow students the space to make mistakes but recover quickly. You can learn from those experiences and then jump into a new team and project with new perspective and excitement.”

Computer science teams begin by pitching their game ideas to instructors and teaching assistants, who help adjust those ideas to a reasonable scope. Then they create a prototype, presenting their first working code to the class to get helpful early feedback. The first playable build is presented next — just enough to show a single level or puzzle — so that teams can begin playtesting and receiving outside feedback. Finally, teams celebrate their completed projects in a show and tell. 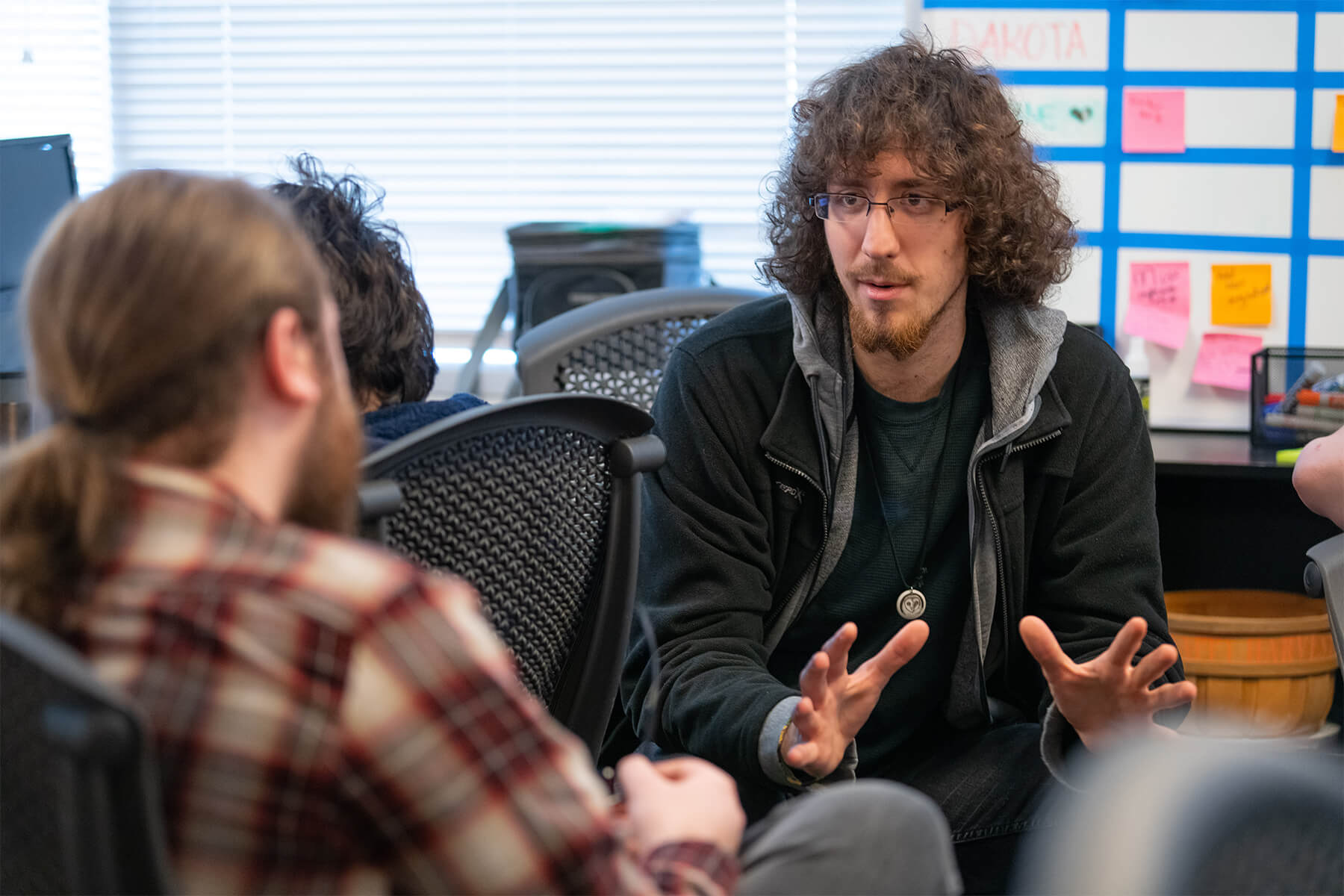 By the time BA in Game Design students take GAM 120, a second-semester freshman year course, they will have taken classes in basic computer science and the Unity engine. Like computer science students, designers spend the first part of GAM 120 creating small solo game prototypes using pre-provided art assets, then join together later for a larger team project. But rather than building their game engines from scratch, designers create their projects in Unity. “The solo projects in the first half of GAM 120 are people trying to show their early design specializations and earn their marks as, say, a user experience designer,” Radakovich says. “Then the designers are partnered into three-person teams where they really start to specialize a little bit, making a larger 2D or 2.5D game for the last half of the course.”

In GAM 120, game teams consist of one system designer responsible for the mechanics and the controller; a user experience designer responsible for the user interface, virtual camera, animation, and feedback; and a level designer responsible for creating character and level content. All designers contribute to coding the game but are also graded individually on their specialized focus areas. “Getting the game to function in Unity is step one, but then you’re being graded on the advanced design elements — whether or not the game is fun, feels good, is engaging, memorable, and affects the player,” Radakovich says. Given that the games are built in Unity, design student projects have lots of potential for sophistication despite being first-year attempts. “We want something students will be proud to show their friends and family, where they’ll say, ‘Wow! You did this? It looks and plays like a real game!’”

What matters most is that you just show up and engage.

For computer science students, rather than receiving a letter grade on freshman game projects, GAM 100 and 150 are both pass/fail classes. “You don’t need to have a fun game to pass GAM 100 or GAM 150,” Chambers says. “You can have a really rough game but still learn a lot along the way. What matters most is that you just show up and engage.”

That space to engage extends to the division of labor as well. Since all the students creating freshman computer science game projects are programmers, roles within teams tend to be much more fluid. “Everyone has to write code for the game, but there are lots of other things to do such as design, art, and audio,” Chambers says. “No computer science discipline takes the lead on anything in first-year project classes — we actually encourage everyone to try different roles.” The room for experimentation allows students to find early strengths and interests within the game development process, as well as face inevitable programming challenges without undue pressure.

“Even though all the students think the classes are about making games, much of the learning actually just comes from forming teams and working with others,” Chambers says.