Game development is more than a creative exercise — sometimes it’s a race.

You start out with a vehicle — something to drive the overall experience, such as a clever new game mechanic, or a game world so absorbing that players will want to pore over every detail. Then you need some fuel — the funding that makes it possible for the project to move forward. And then, once you fire up the engine, it takes a skilled team to stay on course, navigate unforeseen obstacles, and hopefully make it to the finish line.

In all of these areas, Refract Studios has a head start. Made up of 2012 DigiPen graduates Kyle Holdwick, Jordan Hemenway, and Jason Nollan, the fledgling company recently received an injection of more than $160,000 in Kickstarter funding to create Distance, an arcade-style racer set in a dystopian world. It’s the spiritual successor to Nitronic Rush, the hit “survival driving game” that Holdwick, Hemenway, and Nollan, along with five others, made as DigiPen students. But even though Nitronic put them on the map, the team didn’t always have a sequel in mind.

“We knew that we wanted to start a company, and we wanted to be independent,” Holdwick says. “Initially, we wanted to do more of a smaller 2D game, like an atmospheric sort of experience.” But they kept coming back to the same question: “What if we made a sequel to Nitronic and continued to build upon it?” They started prototyping the new game using the Unity engine and quickly realized they had found their direction.

The team identified two key areas they wanted to focus on in their new project. “The first thing we wanted to address was the lack of multiplayer in Nitronic Rush,” Holdwick says. “That was really clear to us, because when we released the game, a lot of people commented on it. And unfortunately, just because of how we built that engine, we didn’t really have that in mind in the beginning, which really kind of hurt us.”

Beyond that, the team also wanted to add some nuance and texture to the game’s world, to flesh out the story into something darker and more mature. “If we could do something really experimental with the atmosphere and how the world is designed and built and how it tells a story — that really appealed to us,” Hemenway says. “So we thought, ‘What if we pushed for a kind of dystopian, mysterious world, and it was less of the crazy neon colors everywhere and a little more focused and directed?’” 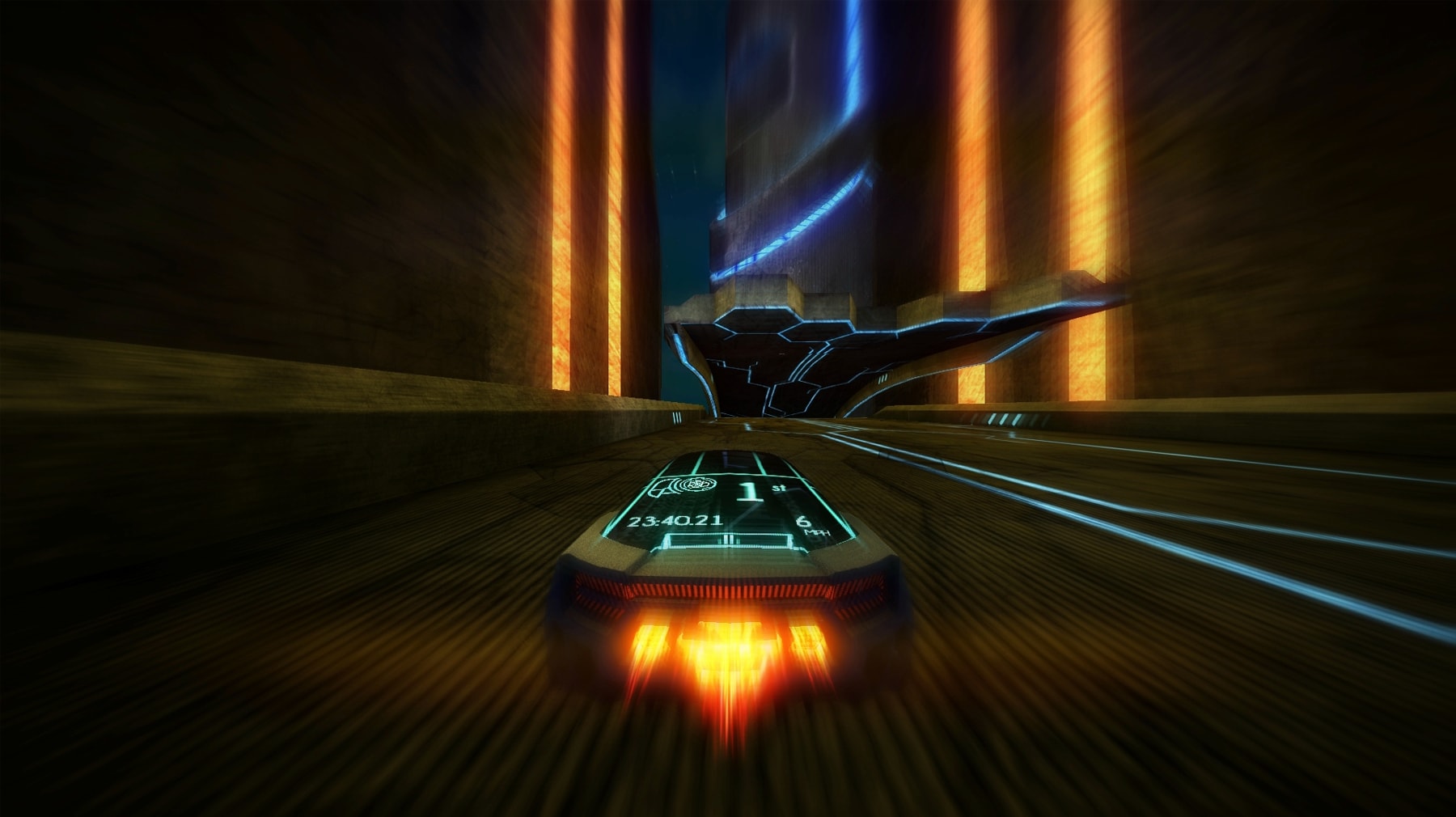 Holdwick, Hemenway, and Nollan knew where they wanted to take their game (which, by this point, had earned the name Distance). The next step was figuring out how to fund it. Since they were no longer students, they would have to purchases licenses for all the software they would use. They would need to pay for servers for hosting multiplayer matches, as well as software solutions to detect and punish cheaters. They needed an artist to help come up with the look and feel of the game. (All three members of Refract Studios are programmers.) And they would need enough money for food and shelter while they dove into the business of writing code.

Their first plan of attack was to speak with traditional publishers and see what it would take for a larger company to fund the project. “We talked to Microsoft. We talked to Ubisoft,” Hemenway says. “We talked to a bunch of different companies, and kind of just threw out there, ‘We’re going to be starting this company. We want to do all this stuff. What do you think?’”

After those high-level conversations, the team had a clear understanding of what it would cost for them to go that route. “If we wanted to release Distanceon consoles, we realized what would happen: We’d have to give away exclusivity for the game, or a part of the company, or a huge profit share,” Hemenway says.

The alternative was less straightforward, but potentially more rewarding. The team could forego publisher capital and release the game on more open platforms like PC, Mac, and Linux, either through Steam or their own website. They might still have the option to release it on consoles at a later point, and more importantly, they would own what they created — not the publishers. The only catch was they would need to find an independent source of funding. That’s where Kickstarter came in.

“Kickstarter was a huge challenge for us,” Holdwick says. “There was a lot of prep work that went into the campaign, and then once we had launched it, that month was huge.”

While continuing to develop Distance, the team performed their own PR and marketing by responding to emails and writing updates to their Kickstarter page. They recorded, edited, and released new videos, doing everything else they could to get the word out about the project. “That was a double full-time endeavor,” Holdwick says, “because for a long period during the campaign, we weren’t sure if we were going to make it. So it was a battle every day.”

They weren’t completely on their own, though. Students, faculty, and administrators rallied behind the project by contributing and encouraging others to do the same. “The biggest thing that DigiPen offered is what it offered when we were students here, which is the community,” Hemenway says. “From the very beginning, DigiPen people were our first backers, and they were helping us push to our goal until the very end. There were admin people at DigiPen that backed it. There were teachers and students — the continuous encouragement was huge.”

I think any DigiPen student could do what we’re doing,” Holdwick says. “You just have to want to do it.”

Holdwick agrees. “The support has been really incredible,” he says. “We graduated, we’re alumni, and they’re still doing everything they can to help us.”

Refract Studios’ next step is to produce the alpha version of Distance, which will be available to select Kickstarter backers. “We feel like we have a decent idea of how to make the game — that’s second nature to us at this point,” Hemenway says. “But we want to make sure that the way that we operate is as cost-efficient as it can be.”

As for the unconventional path they’ve taken into the game industry, they’re quick to point out that nothing they’ve done so far is out of the question for other DigiPen graduates. “I think any DigiPen student could do what we’re doing,” Holdwick says. “You just have to want to do it.”

And as much as the team is motivated by the enthusiasm of their fans and the support of their community, they’re first and foremost driven by a love of game development.

“The game industry is so young still, and there are so many opportunities for innovation,” Holdwick says. “We’re super excited to be a part of that.”

Meet the Many Dragons That Helped Forge Halo Infinite