As a child of the early ’80s, Peter Kugler dreamed about making games long before it became his day job.

“I grew up in a really, really cool time for pop culture. I was a kid at the point when The Empire Strikes Back was shown in the theater, which means that I also had the toy collection from that film,” he said. “And then also what was popular at that time … was Pac-Man. So I remember eating Pac-Man cereal, watching the Pac-Man cartoon, playing Pac-Man at my friend’s house, and playing Pac-Man in the arcade.”

These were just a few of the early memories that Kugler, a 2007 graduate of the BS in Computer Science in Real-Time Interactive Simulation program and a lead engineer at renowned game studio Bungie, recounted to an audience of about 250 campus visitors on Saturday during a special presentation. In addition to sharing some insight into the history of Bungie and the many roles that make up a modern development team for games like Destiny 2, Kugler spoke at length about his own journey into the world of professional games.

His childhood daydreams aside, Kugler says it was a long time before he really began to make his first concrete steps toward the practice of making video games.

“I didn’t have anyone around that could show me how to do that,” Kugler said. “My dad had done some programming in college, but he was a doctor so he didn’t really help me there. But he did at least try to point me in the right direction.”

As a third grader, he recalled, he went with his dad to the library to print out instructions for programming simple games on a home computer. “The first games I made, they were stick-figure Olympics in QBasic,” he said. “On the keyboard, you basically just tap the arrows to make them run and jump over hurdles.”

Years later, in high school, Kugler learned how to program games on a graphing calculator — games he was able to share with other people. Being the child of a military parent, whose family frequently moved, games became a hobby that helped Kugler make new friends and acquaintances. 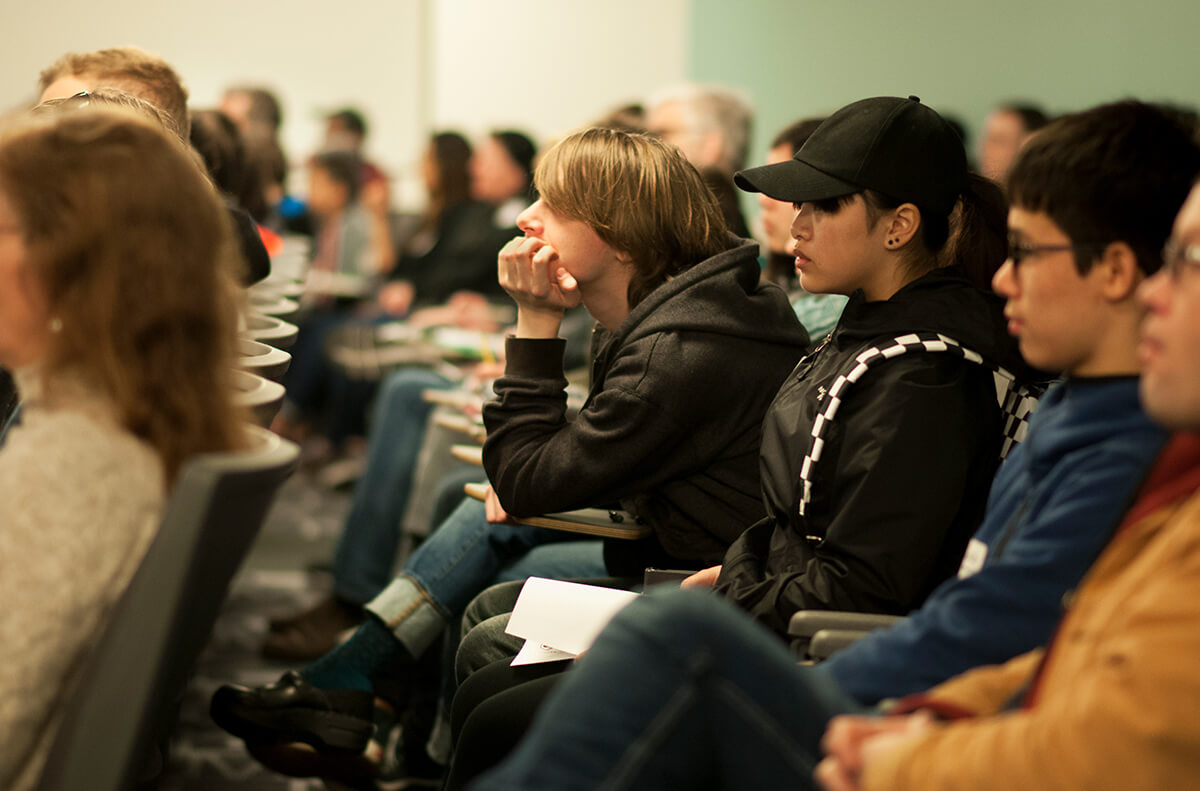 Before attending DigiPen, Kugler earned his first college degree in education and began his career as a special education teacher. It was in this capacity that he met his wife, who was also a teacher at the time, and together the two of them bonded over a shared passion for curriculum development. Even in teaching, Kugler says, he and his wife found ways to incorporate games and technology into their educational curriculum. “It was such a big hit that I think the principal became pretty suspicious about what was going on.”

It was such a big hit that I think the principal became pretty suspicious about what was going on.”

One example that proved successful was using the Japanese-developed RPG Maker for the Sony PlayStation — a game where players could create their own mini adventures and scenarios. In this case, Kugler and his wife used the game to create interactive history lessons, initially for a pilot history education program at his wife’s middle school.

“It was such a big hit that I think the principal became pretty suspicious about what was going on. He was like, ‘They’re playing games in school. That sounds kind of fishy.’ So I remember he went to go check on her and then realized, OK, they were doing something academic,” Kugler said. “But it was nice. We actually made several interactive lessons through this means.”

During one of these lessons, Kugler was approached by a student named Sally who mentioned something that stuck with him.

“Sally told me, ‘This is a neat idea you’re trying out with us, Mr. Kugler, but what’s unfair is that you get to have all the fun. You’re the one that’s making the game. We want to learn how to do that,’” he said. “So that was kind of this big moment. I just started thinking about all these crazy ideas.” 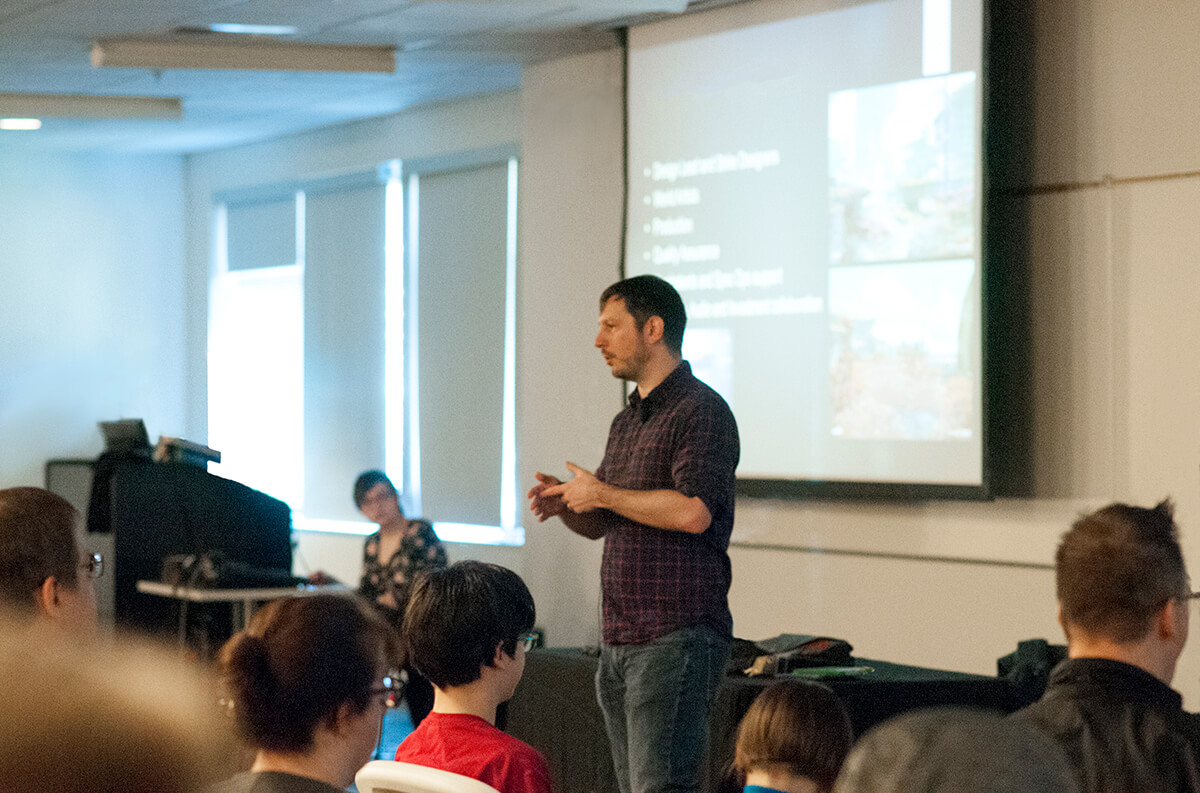 Kugler says he came to a crossroads. On the one hand, he considered pursuing his doctorate in curriculum development, a path that would allow him to continue creating and investigating new forms of learning experiences. Or he could finally focus on learning to make games, a path that would not only satisfy his own curiosity but perhaps also lead to new ways of educating others.

He chose the latter option and soon found himself moving to the Pacific Northwest to attend DigiPen.

In addition to attending classes, Kugler also began working with the Bellevue School District to develop educational courses in computer science and media technology — some of which incorporated basic game-making lessons.

The design work … isn’t the result of just one hero’s work or one small team’s work. It’s actually the result of a collective body of work across the whole company.”

During the summer before his final year at DigiPen, Kugler landed an internship position at Treyarch in Santa Monica, California, where he worked on the game Call of Duty 3. After graduating, he started his first full-time development position at Microsoft Game Studios, a position that a few years later led to him joining the 343 Industries team that worked on Halo 4 and other Halo titles. And from there, it was a former DigiPen classmate who would eventually help recruit him to Bungie, which he joined in 2013.

Today, as lead tools engineer, Kugler has worked on both the original Destiny and its 2017 sequel, Destiny 2. He’s also heading up a new internship program that he hopes will serve as a pathway for young game developers to get their start in the industry.

“I work on the software that helps the artists and designers bring their ideas into the game,” he said. “I work in the research and development organization at Bungie. And so we work on bigger initiatives, and then once we get them into a good spot, we’ll bring them into the main product line.”

With about 700 employees, including dozens of DigiPen graduates, Bungie itself is comprised of many roles and job types — from artists to audio designers to software engineers — each belonging to any number of small, dedicated teams. It all goes to demonstrate the enormous effort and diversity of talent that’s required to create something as massive and technologically sophisticated as Destiny 2.

“The design work … isn’t the result of just one hero’s work or one small team’s work. It’s actually the result of a collective body of work across the whole company, which is really neat,” Kugler said.