Have you ever imagined wielding telekinetic powers? Ever tried staring intensely at an object in the hopes of forcing even the slightest nudge or twitch? If so, 2007 DigiPen graduate Lat Ware is making the game for you.

“This will deliver on the childhood fantasy of being a Jedi,” Ware says. “I’m giving you a clear video game representation of a muscle you didn’t know you had.”

In Throw Trucks With Your Mind, players harness their raw mental willpower to crush their enemies with flying objects — including, but not limited to, trucks. While the game functions like a first-person shooter with standard mouse and keyboard controls for moving and aiming, the shooting is removed entirely, replaced instead by a suite of paranormal superpowers you control with your brain.

What might sound like a pipe dream is made possible through the use of electroencephalogram (EEG) technology. By donning a medical-grade EEG headset — no more intrusive than a standard microphone headset for online gaming — the device measures and digitizes the player’s real-time brainwave activity. Specifically, it measures for two kinds of activity: concentration and relaxation, each of which corresponds to certain abilities within the game. For example, the player’s concentration level determines the speed and force with which they can throw environmental objects. Relaxation, or calmness, lets players lift things, as well perform superhuman jumps.

This will deliver on the childhood fantasy of being a Jedi.”

While EEG technology has been established for well over a half-century, it’s only recently become commercially affordable, with simpler, more sophisticated devices that can filter out unnecessary information and do not require the application of gel to the skin.

Ware’s first encounter with EEG came about through a series of neurofeedback therapy sessions for his attention deficit disorder when he was 12. With the help of an EEG device, Ware was able to visualize and practice controlling his thoughts and focus.

“It’s a legitimate treatment for ADD, ADHD, anxiety, and depression. So I knew this tech existed,” Ware says. 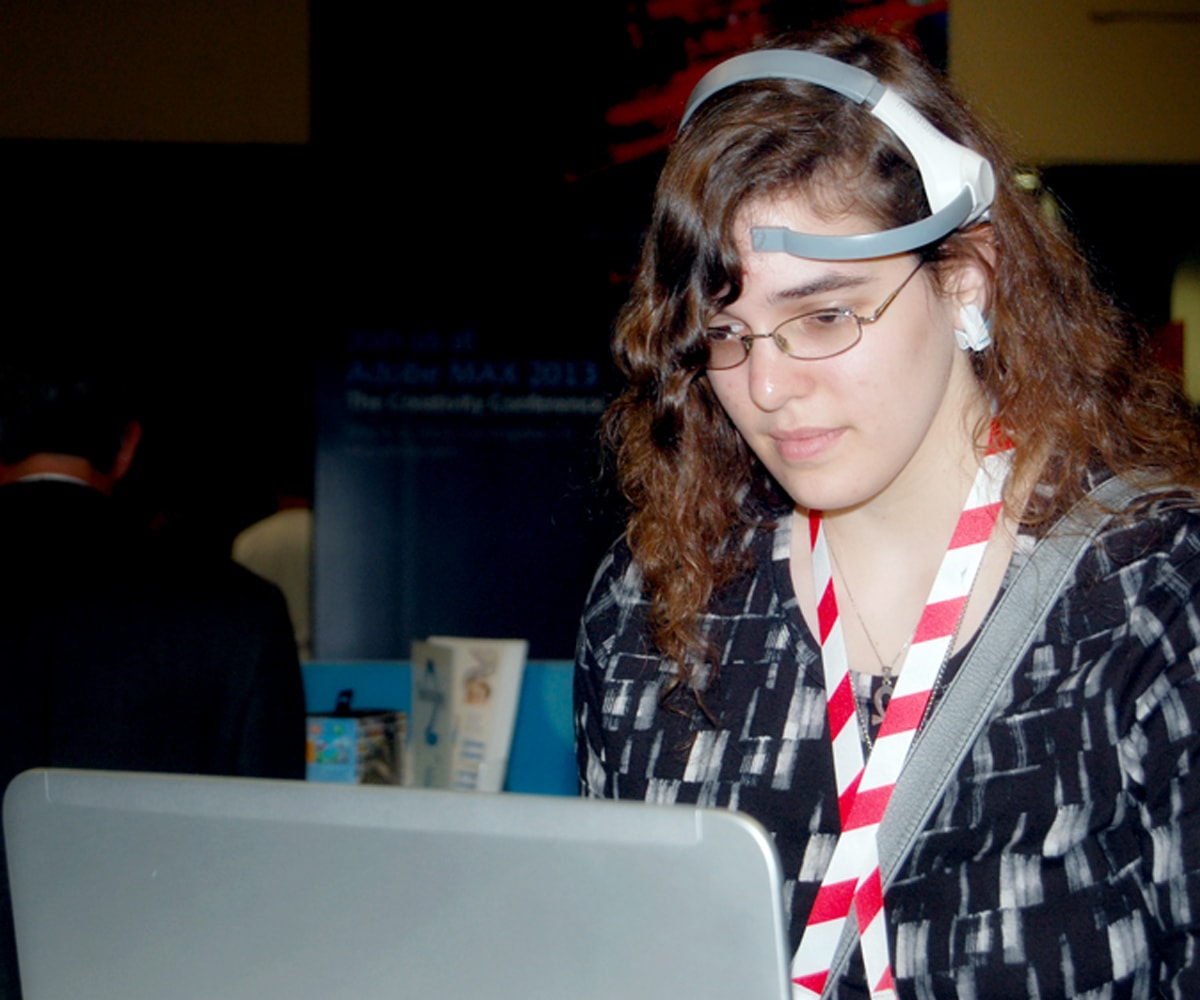 Ware’s idea for an EEG-based game was inspired nearly a decade ago when California-based company NeuroSky demoed a similar game prototype using Valve Software’s Source Engine as an application for their headset products. Even though the company had no intentions of taking their prototype further, Ware saw the potential for creating a polished commercial product. So when NeuroSky introduced an EEG headset for $100 in 2011, Ware jumped at the opportunity.

“I immediately bought two and started work on my game,” he says. “I’ve been working on it as a hobby project.”

That was the case until six months ago, when Ware quit his programming job to pursue working on Throw Trucks With Your Mind full-time. Using the free Unreal Development Kit tool, he programmed a proof of concept for the game that lets two players face off head-to-head in a series of 3D environments. There are barrels, steel crates, and a military-style vehicle that players can psychically toss around as weapons.

We want to make something silly, something lighthearted — doesn’t take itself too seriously.”

Although Ware looked for groups to help fund the game’s development, investors did not want to commit without proof that the idea had traction. So in February, Ware launched his game on Kickstarter, asking for funding to recreate the game with original artwork, animation, audio, and level design. The project generated some buzz in the press, and by the end of the month-long campaign, Throw Trucks With Your Mind was backed and funded at more than $47,000.

With seed funding in place, Ware was able to hire four artists, all of whom share one particular trait: they’re all fellow DigiPen graduates.

“DigiPen was good to me,” Ware says. “It gave me my gaming career. I intend to give back.”

“We want to make something silly, something lighthearted — doesn’t take itself too seriously,” Ware says, “which is why one of the characters is a cat in a robot suit.” 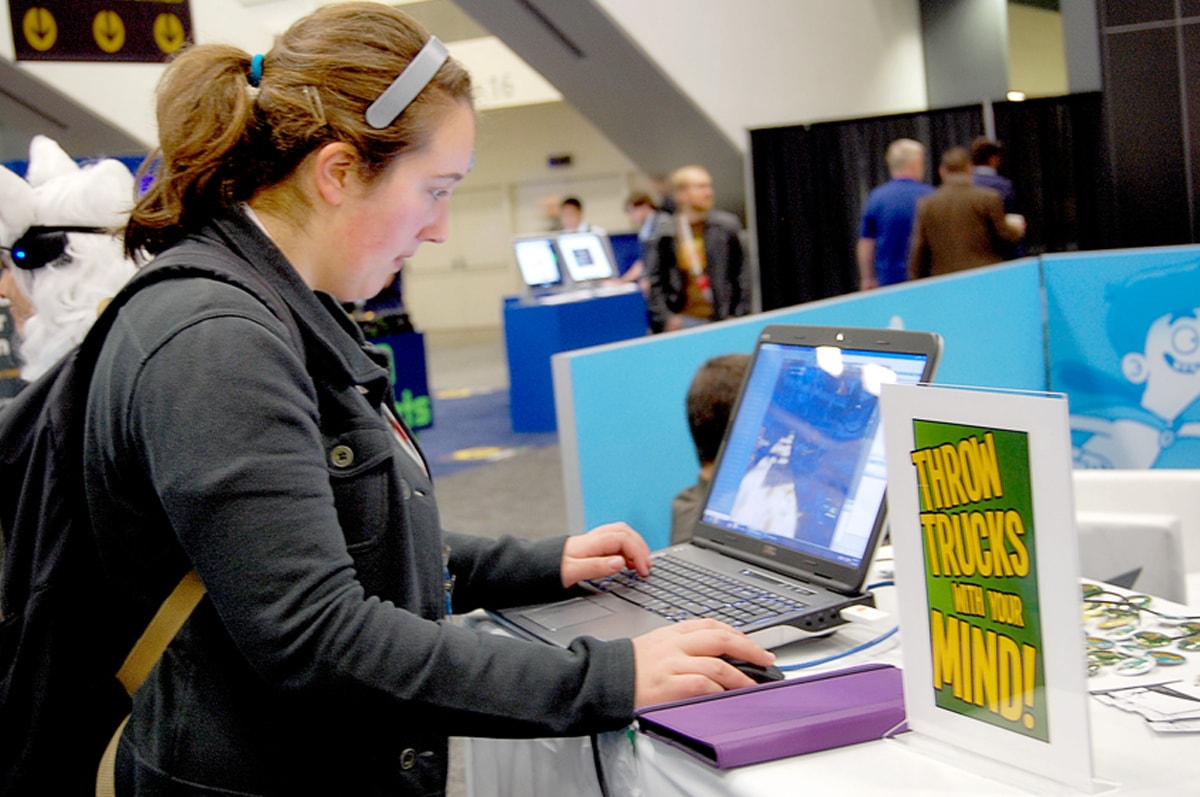 Despite meeting his funding goal, the amount received is only enough to cover his new art team, as well as fees and backer rewards. None of the money is going to Ware himself.

“Right now I’m hiring only a minimal team, but I have this dream of — once this is successful — going to investors again and saying, ‘I’ve proved there’s a market for this. Let’s make a triple-A game.’ And then come back and hire more,” Ware says. “The fact of the matter is the games I want to make are not going to get made unless I am the CEO championing the cause.”

After people play for about an hour, they can just be focused and calm on demand.”

Ware had an opportunity to showcase his prototype in March at the Game Developers Conference in San Francisco. As an independent vendor inside the NeuroSky booth, Ware gave passersby the opportunity to try on the headset and experiment with the game’s mechanics, as well as go head-to-head with friends and strangers. For each new game tester, Ware helped calibrate the headset and offered instructions for how to play.

“The headset doesn’t care what you focus on, only that you are focused,” Ware instructed one player. “I want you to focus so hard you send the truck flying.”

While some people caught on almost immediately, for others it took a couple minutes of mental practice to raise their red concentration gauge. As a starting exercise for the competitive multiplayer, Ware positioned players on either side of the truck, telling them not to move but only to concentrate on throwing the truck at their opponent. The result was like a mental arm wrestling match. As each player flexed their cerebral muscles the truck would begin to jostle, until eventually — and often suddenly — one person’s focus overpowered the other.

There are people out there who saw what I did and said, ‘Shut up and take my money!’”

“After people play for about an hour, they can just be focused and calm on demand,” Ware says. “Watching people fight … is this amazing flurry — people in a constant circle strafe, throwing things at the other person, catching things that are thrown at them mid-air and throwing it back.”

If market data indicates a lack of demand for EEG-based games, Ware offers a simple explanation. Most available EEG-based games, he says, simply aren’t much fun. Introduce something that people enjoy playing, and the market will grow.

“It’s like how all market data said that no one wanted Guitar Hero,” Ware says. “There are people out there who saw what I did and said, ‘Shut up and take my money!’ Literally, some people did that.”