Earlier this year, with the release of Infamous: Second Son, the developers at Sucker Punch Productions brought their celebrated brand of open-world, action adventure to the PlayStation 4.

Set within a fictionalized version of Seattle, the third entry in the Infamous series introduces players to an all new protagonist — a fun-loving graffiti artist named Delsin Rowe, whose newly discovered super powers allow him to tear through the city in a blaze of smoke and neon. The game’s first DLC episode, titled First Light, which features a new main character and storyline, arrived last week.

Among the approximately 100 developers who worked on Second Son and the new standalone episode, at least seven team members were DigiPen graduates. We spoke with three of the graduates about their roles on the project, spanning multiple disciplines of art, programming, and design.

As the art director at Sucker Punch Productions, Horia Dociu (2003, A.A. in 3D Computer Animation) is in charge of overseeing all aspects of the Second Son visual world — from concept stage to final polish.

“The job kind of changes depending on where you are in production, but essentially my role is to give direction,” Horia says. 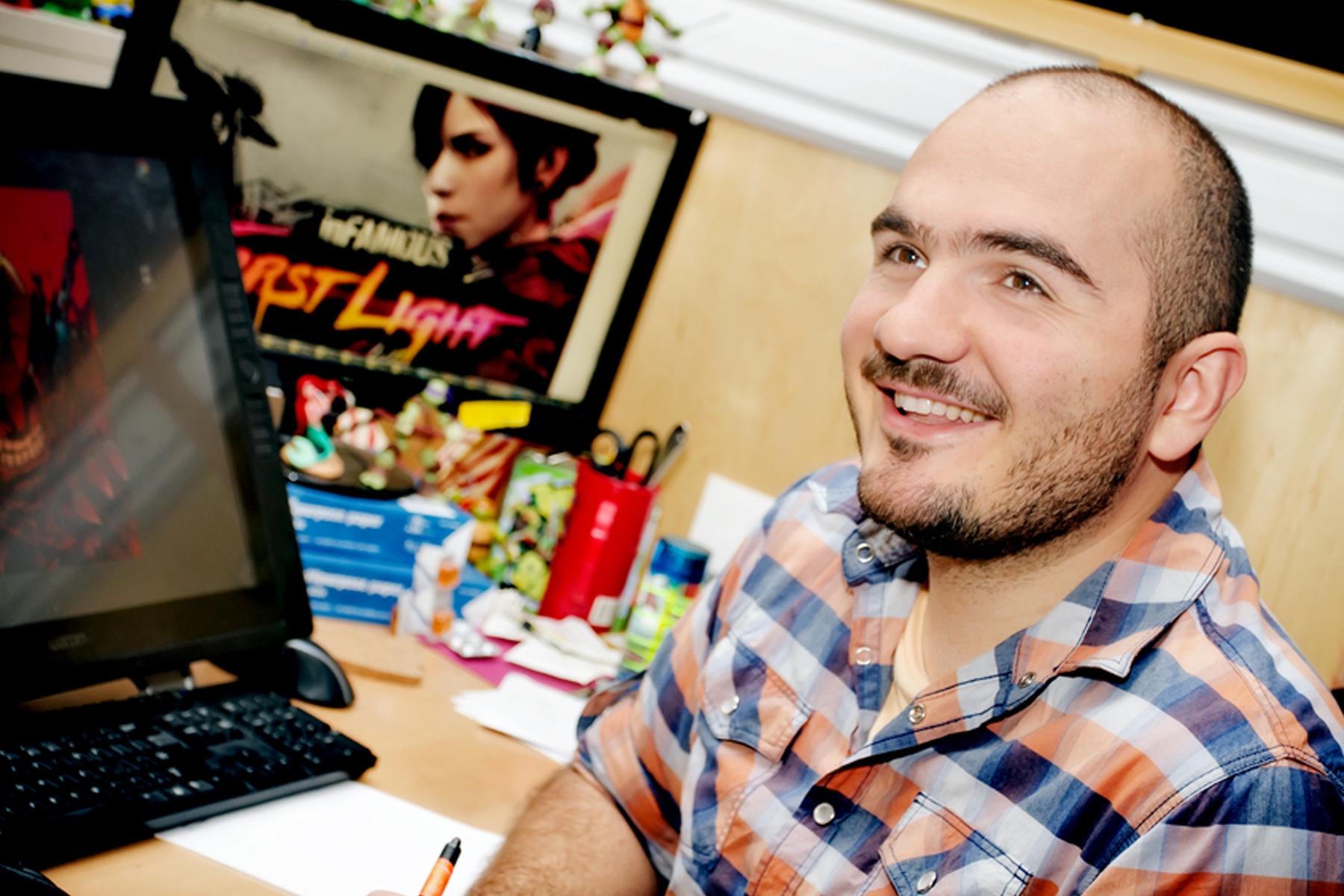 In many cases, that means working directly with the artists responsible for creating the characters, environment textures, lighting effects, and more, making sure the game world looks believably worn in and alive.

It also requires close collaboration with people from other disciplines, such as the engineers responsible for rendering the game’s simulated weather systems and the designers who piece together the overall city layout.

We kind of made our focus be on capturing the essence of Seattle.”

“I guess the undertaking seems pretty colossal if you just think of it as one big sum,” Horia says. “But I think, just like any project, you kind of have to break it down.”

Thanks to the Bellevue studio’s close proximity to Seattle, the Second Son art team didn’t need to travel far when gathering visual reference materials for the game’s setting.

“We went out on photo safaris and took tons and tons of pictures — everything from the skies and the times of day to the particle effects, the weather systems, the nature areas with all the different types of local trees,” Horia says. “We kind of made our focus be on capturing the essence of Seattle.”

While the final version of the game is by no means a street-by-street simulation of that actual Emerald City, it does contain representations of real Seattle neighborhoods and buildings, such as the pink Elephant Car Wash, Pacific Science Center, and — of course — the world-famous Space Needle. Horia says the team even scanned faces of actual Seattle pedestrians to use in the game, designing costumes and apparel inspired by local fashion.

“We had a realistic rain system built where the rain will actually build up on any surface in the game and get wetter and wetter,” Horia says. “So like in Pioneer Square, the water will start filling in between the cobblestones and create puddles and streak down the walls of buildings.”

For Horia, one of the most enjoyable features of the new game is its optional Photo Mode, which lets players pause the action and reorient the camera to take highly detailed screen captures to share with others. Already, he says, it’s opened up a whole new creative outlet for fans.

“People have taken some breathtaking photos,” Horia says. “It was almost like we created this world, and then we got to rediscover it again.”

As a 10-year veteran with the studio and an expert source of knowledge when it comes to the game engine codebase, Adrian says he’s able to navigate many areas of a game project’s graphical development — offering advice and helping solve problems as they arise. He also provides management for a handful of fellow rendering and engine programmers. 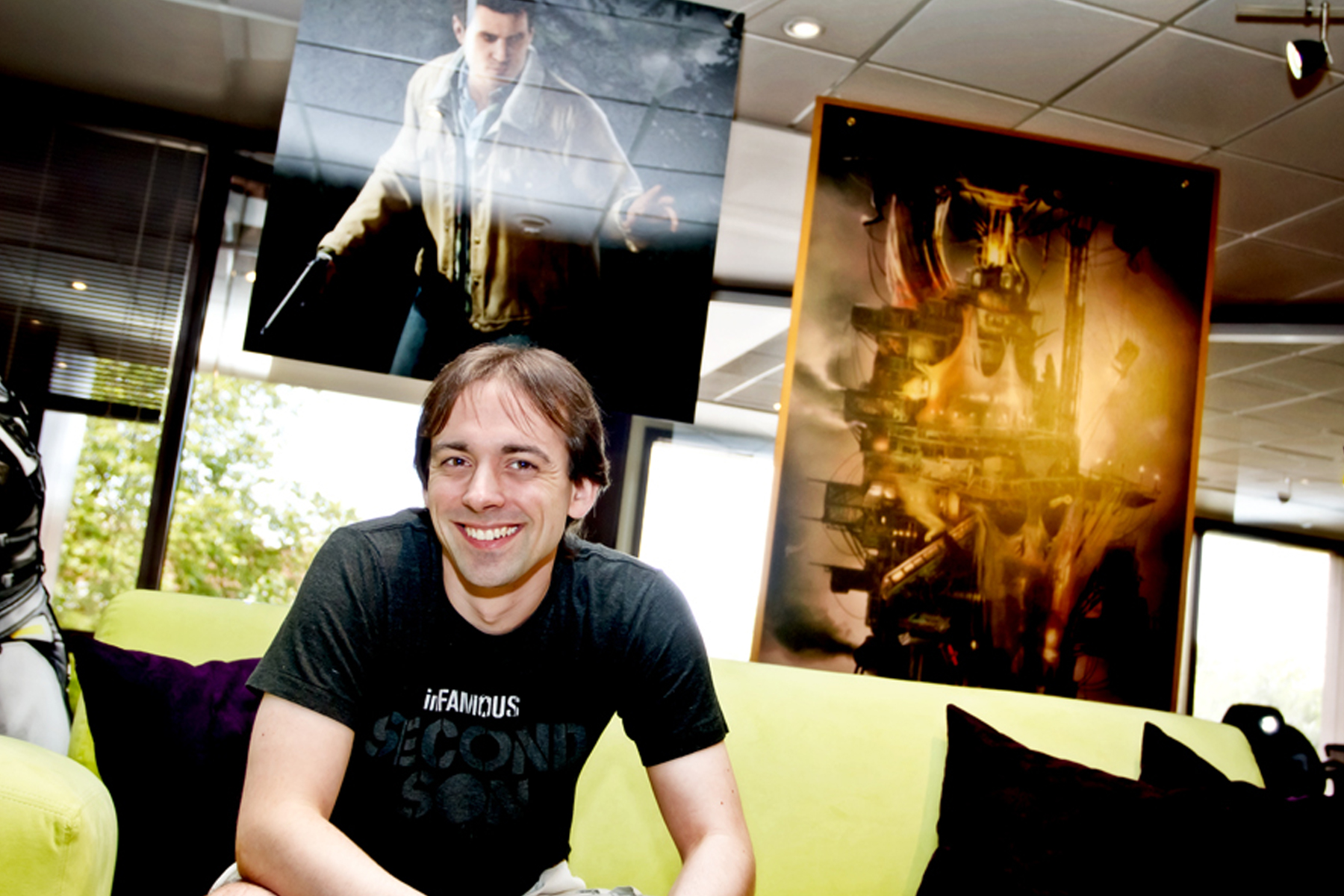 For Second Son, much of the game’s early development time was devoted to upgrading the Sucker Punch game engine for Sony’s new PlayStation 4, a console with — among other things — a much more robust graphical processing unit (GPU) than the previous iteration.

“We’re still at the point where we’re trying to understand how everything works and how to wring the most out of the chip, but it’s pretty cool,” Adrian says. “The PS4 exposes things in such a way that you can actually get a lot more done.”

You’re trying to emulate the actual look of how the light will get brighter as it glances off of a slightly polished sidewalk.”

In terms of improved graphical features for the new game, Adrian says one of the team’s most successful investments was in implementing what’s known as a physically based lighting model — essential for capturing the authentic appearance of Seattle’s glistening, rain-slick environments.

“You’re trying to emulate the actual look of how the light will get brighter as it glances off of a slightly polished sidewalk,” Adrian says. “So we had to add that kind of extra-specular complexity into the world to make it actually look like it was wet. Otherwise it just wouldn’t look right.”

Another improvement made possible with the new GPU was a complete overhaul of the game’s particle systems, including a brand-new tool that allowed artists to create each of the stunning visual effects related to the main character’s superpowers.

“We were able to get some pretty cool stuff out of that, which is pretty different from a lot of other games — like the draining powers where you can take a sign, pull all of the neon energy out of it into little tiny particles, and suck that into the main character’s hand,” Adrian says. “It was only possible because we spent a ton of time to add the right set of toolbox features.”

As a systems/technical designer at Sucker Punch, Ted Fishman (2010, M.S. in Computer Science) focused on one of the most elusive aspects of Infamous: Second Son: the “feel.” 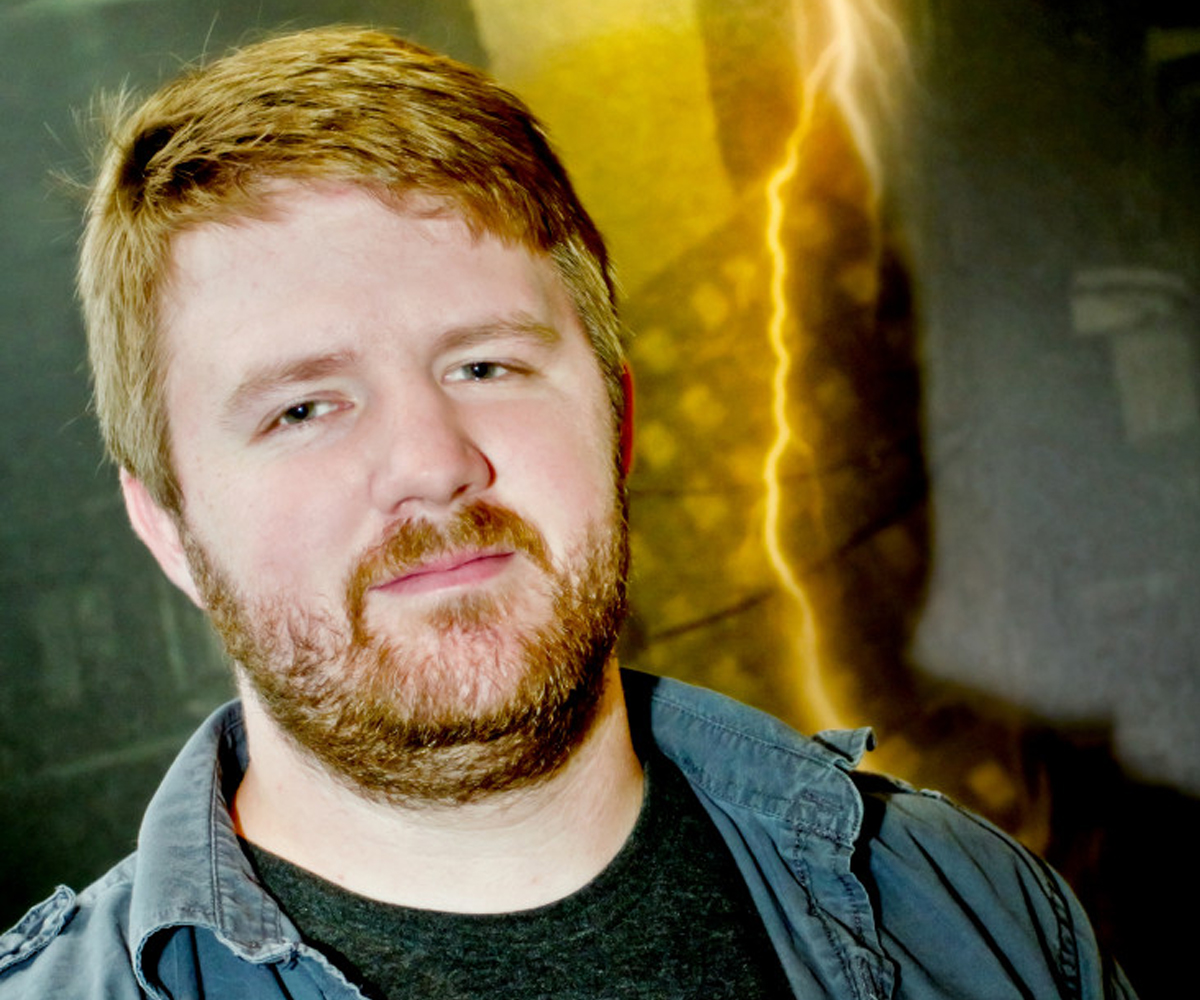 In particular, he and his team worked on the persistent systems that affect the flow of the game.

“In Second Son, for example, one of the macro-level systems we had was the ‘streak meter,’” Ted says. “When you do a certain number of good or evil actions, you can unleash a really powerful attack. So the pacing of that, how it decays – that was one of the systems I worked on.”

Ted’s role was also to act as a bridge between the programming and design teams, able to speak both languages fluently and take on tasks that would be too time consuming or difficult for either a lone programmer or designer.

“I can jump in to help mission riggers get something done, because I know how the back end works,” he says. “Or if we don’t have enough resources to do something, I can get it up to a prototype level so we can figure out: Is this fun? Is this interesting?”

Ultimately, Ted says, his role was to figure out what kind of experience players wanted to have and create systems that support that experience.

“Like, if you’re a superhero in Seattle, how can we make it feel like you’re building up power?” he says. “Or, does it really feel like you’re driving people out of the city? Because we had all these towers and bridges that can go on lockdown throughout the city, and we wanted to make it feel oppressive.”

Ted took an unusual path to becoming a designer at Sucker Punch. As an undergraduate at the University of Washington, he studied physics, but “realized about junior year that I didn’t want to be cooped up in a lab – I like interacting with people, and I liked computers.”

One thing I learned at DigiPen was the difference between your intention as a designer and the way that players experience it.”

After graduating with a physics degree and a handful of programming classes under his belt, he enrolled in DigiPen’s M.S. in Computer Science program, where he specialized in physics programming. But when he interviewed for a junior programmer position at Sucker Punch, his interviewers felt his temperament and sensibilities made him better suited to design rather than programming.

That doesn’t mean his background in physics hasn’t helped him in his current role, however.

“The number one thing that I use for gameplay prototyping is vector math,” Ted says. “It’s very similar to a lot of the physics stuff we did at DigiPen.”

And just as importantly, he gained the ability to take a more critical approach to his own work.

“One thing I learned at DigiPen was the difference between your intention as a designer and the way that players experience it,” Ted says. “People have a tendency to treat their game like their baby, that it’s perfect the way it is. But sometimes you need to take a step back and ask, ‘What can we do better?’”